‘Strict regualations will apply on these facilities for the orderly operation and movement of migrants. The exit will be allowed only by card for a certain period of time and it will be prohibited in the evenings,’ said the government spokesman. 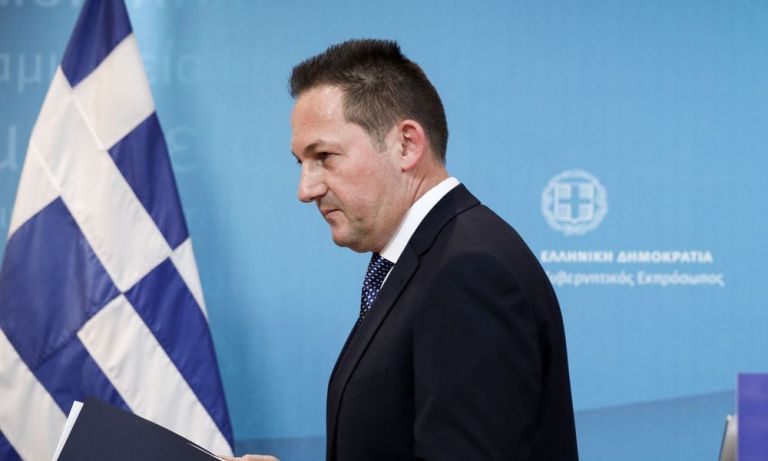 Amidst a barrage of criticism over its lack of a comprehensive plan for dealing with the refugee migrant crisis, government spokesman Stelios Petsas maintained that there has been progress in correcting the deficiencies in SYRIZA’s management of the crisis.

There were about 5,000 refugees and migrants on the four Aegean islands where most migrants reside and now there are over 20,000 SYRIZA counters.

The main difference is that SYRIZA allowed those in detention centres  to exit and return freely while the ND government will establish closed, fenced-off centres which will require a pass to exit and will close at night.

The government’s plan to requisition non-arable tracts on Lesvos has led local officials on the islands to refuse cooperation with the government until it revokes the emergency measure.

Petsas said that the New Democracy government is ensuring the better protection of borders, the speeding up of the asylum procedures, the increase of returns and the creation of ‘closed structures’.

The government’s proposal to place a floating barrier in the Aegean to bar migrant boats from reaching the Greek islands was widely criticised as ineffective and mocked.

Petsas maintained that the government is correcting the SYRIZA government’s looser approach in order «to close the current anarchic structures and create controlled closed structures.»

«Similar structures, next to the existing ones, will also be created on Leros and Kos, in lands owned by the Greek state,» he added.

«Strict regualations will apply on these facilities for the orderly operation and movement of migrants. The exit will be allowed only by card for a certain period of time and it will be prohibited in the evenings. Any violation of an internal rule of law will negatively affect the asylum application and will speed up the process of returning the offender [to the country of origin]. In addition, we are setting up a special registry of Non-Governmental Organizations (NGOs) to monitor the activity of hundreds of NGOs operating in the country,» he said.

The government has fueled a debate over the oversight of NGOs volunteering with refugees and migrants.

It has suggested that they may have a role in inciting refugee protests and may have mismanaged EU funds earmarked for refugees.