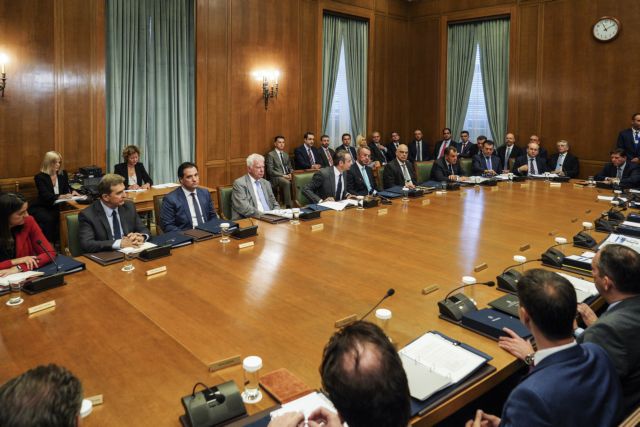 The government’s organisational plan is not rare as it is implemented in most eurozone states and is a compass for all organised and institutionally mature democracies worldwide.

The governmental organisational chart presented by incoming Prime Minister Kyriakos Mitsotakis is by all accounts innovative and is the first reform at the highest administrative level of the country.

Essentially it is the first attempt to apply principles and rules of corporate governance that have existed for decades in the private sector to the government and the state.

That aim was promoted by the selection of numerous extra-parliamentary cadres who have experience and have been tried and tested in the extremely competitive private sector.

The government will incorporate elements of corporate governance to become more effective and productive.
The aim is to gradually transcend governmental delays and political complications that bind the country, immobilise the bureaucracy, and allow all manner of vested interests and interests groups to intervene in a problematic manner.

The aim is to create in Greece what in advanced countries is a well-staffed and organised state that knows what it wants and how to achieve it.

The government’s organisational plan is not rare as it is implemented in most eurozone states and is a compass for all organised and institutionally mature democracies worldwide.

The prime minister was well-prepared when he took office. The structure of the government was studied, individuals were carefully selected, and the overall plan was well thought out.

The PM has set up a plan of production, coordination, monitoring, and evaluation of the government’s work based on specific, pre-selected, and quantifiable targets that will be met by ministers.

One received a first glimpse of bi-annual targets and priorities from the “blue envelopes” that ministers received at the fist cabinet meeting.

In the next stage in cooperation with ministers, coordinators, and liaisons with the PM’s office the 2020 targets will be set.

The central aim is for the new structure of the administration and direction of the government to operate as soon as possible and to bring on board the bureaucracy, with general directors, directors, and supervisors of state services being assigned specific roles.

The plan seems grand and important especially if one considers that more limited similar efforts failed miserably in the past.

That explains the prevalent suspicions about the current changes. Yet, everyone must realise that after a ten-year crisis and the implementation of failed and ill thought-out models there is no room for failure.

Greece is ripe for changes and Greek society is ready to accept modern and tested schemes of governance.

Constant and persistent devotion to miserable, old-party schemes is not in line with our era nor with the travails of the Greek people over the last decade.

Over all these years views and consciences changed and citiz ens can no longer endure the schemes tried over the last five years.

A comparison of the many duos of the previous and current governments will lead one to useful conclusions.

One cannot, for example, compare the outgoing minister and deputy minister of public order (Olga Gerovasili and Katerina Papakosta) to their successors Michalis Chrisohoidis and Lefteris Economou.

Citizens want key positions to be filled by competent people who can manage their fortunes.

That was the new realisation that brought the political change which the government must serve faithfully and persistently.

Otherwise it will fail and face the same situation as its predecessor.