Tsipras vows to ratify Prespa accord, complete his term in WSJ interview

‘If we want to protect our national interest, upgrade the role of the country…this mean we should create alliances. And the best strategic ally in the region is the U.S.,” the PM said. 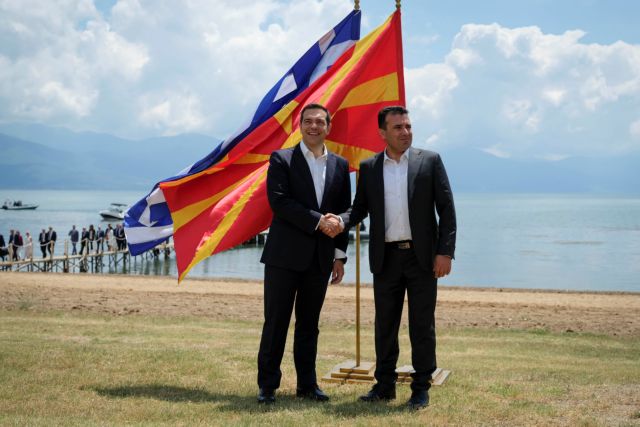 Prime Minister Alexis Tsipras outlined his arguments about the regional benefits of the FYROM naming accord (Prespa Agreement), discussed Greece’s relations with the US and Russia, and ruled out early elections, in an interview with the Wall Street Journal

“I will not play games. The agreement will be ratified in the Greek parliament just after the end of the procedure,” Tsipras said about the Prespa agreement, noting that it will upgrade Greece’s role and influence in the Balkans.

While the left-wing prime minister’s pursuit of closer ties – primarily military -with the US has provoked wry comments from his critics, Tsipras described it as a crucial strategic alliance.

“If we want to protect our national interest, upgrade the role of the country, and make it part of the solution, not part of the problem—as it was three years ago—this means we should create alliances. And the best strategic ally in the region is the U.S.,” he said.

Tsipras also discussed tensions with Russia, after Athens accused Moscow of trying to foment opposition to the Prespa agreement in Greece. In response, Athens expelled two Russian diplomats and barred two others from entering the country.Russia reciprocated.

“We took a decision in order to protect our national interests and this was a very clear signal. We want to have a close cooperation with Russia, but if sometimes there are lines violated we have to react.”

Tsipras projected that his government can withstand the impact of a potential withdrawal of his junior coalition partner, Panos Kammenos, who vehemently opposes the Prespa agreement and has threatened to topple the government, if and when the accord is tabled in the Greek Parliament for ratification.