The trip comes on the heels of the recent meeting between Prime Minister Alexis Tsipras and FYROM PM Zoran Zaev, and after Kotzias unveiled a Greek proposal for an international accord settling all bilateral disputes. 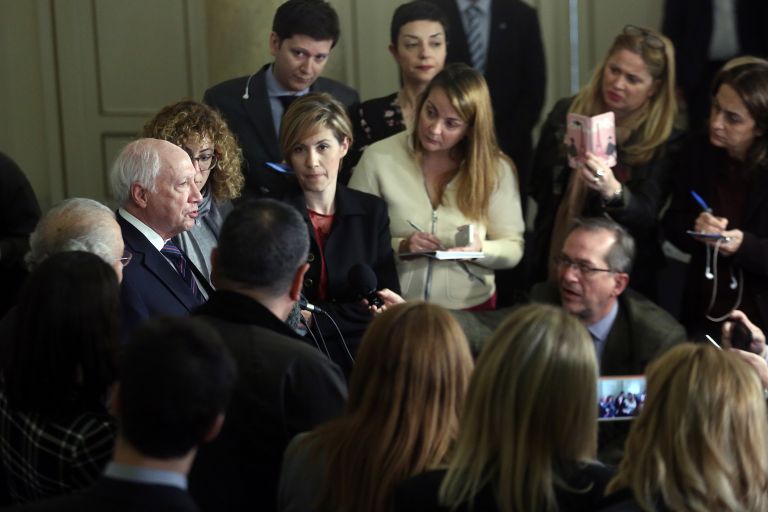 The Slavic renditions of four of the five names for the Former Yugoslav Republic of Macedonia tabled by UN Special Representative Matthew Nimetz, and the Greek government’s proposal for an international accord that would settle all outstanding disputes between Athens and Skopje, were the focus of talks today between Nimetz and Foreign Minister Nikos Kotzias in Athens.

Nimetz, who has expressed optimism over the prospects for a settlement, is on his latest round of shuttle diplomacy, with Skopje as his next stop.

The trip comes on the heels of the recent meeting between Prime Minister Alexis Tsipras and FYROM PM Zoran Zaev, who agreed on symbolic confidence-building measures.

With the Greek government having rejected out of hand one of Nimetz’s proposed names, Rebublika Makedonija – (Skopje), the four names that the two sides are mulling, always spelled as a transliteration of the Slavic rendition, are as follows:

“The briefing we received from Mr. Nimetz unfortunately does not allay our fears. For this reason we believe it is useful to repeat the crystal clear position of New Democracy,” Yorgos Koumoutsakos, the conservative party shadow foreign minister and former foreign ministry spokesman said after meeting with Nimetz.

Koumoutsakos stressed that there must be a single package solution that cannot be divided in parts, or implemented in stages.
New Democracy’s four preconditions

Koumoutsakos said that the settlement must eradicate all vestiges of Skopje’s irredentism. Secondly, it must include a name that is acceptable to the Greek side. Thirdly, the new name must be adopted for all uses and by everybody.

“It is obvious that the only guarantee for all of the above is a revision of the Skopjan [FYROM] constitution,” Koumoutsakos said of the fourth precondition.