Marathon talks between government and quartet continue on Monday

“We made progress, but did not reach an agreement” stated the Minister of Economy Giorgos Stathakis, on his way out of the… 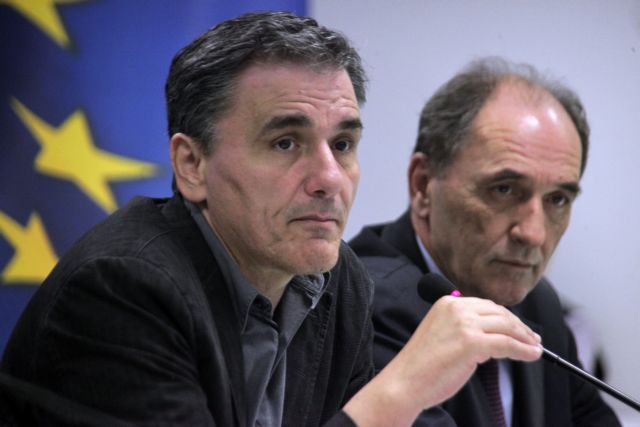 “We made progress, but did not reach an agreement” stated the Minister of Economy Giorgos Stathakis, on his way out of the Hilton at 6:50 on Monday morning, after nine hours of negotiations with the institutions quartet.

The Minister of Economy Euclid Tsakalotos on his behalf commented that the two sides are close to reaching a final agreement on tax measures, adding that a few details remain to be determined. He further noted that a tax-free threshold of 9,100 euros is ‘out of the question’.

A meting was also held with the Governor of the Bank of Greece Yannis Stournaras, in order to discuss the management of non-performing loans. Mr. Stournaras left at about 6am on Monday. Although no details of the meeting emerged, a source commented that “we are close” to reaching a deal.

Talks between senior government officers and the heads of the institutions took place all night long and are expected to resume on Monday afternoon.

Earlier, a senior government official participating in the talks revealed that Europe and the IMF have differing opinions on the effect of the measures that will be taken, with the Fund claiming that they will not be as productive. The same source also argued that the statement of Woflgang Schäuble was ‘predictable’.

Later on, another government source reported that an agreement over the pension reform was not reached during the quartet meeting with Labor Minister Giorgos Katrougalos. The problem, as explained by the Labor Minister earlier, is with the proposed cuts in supplementary pensions.

A meeting was also held with the Alternate Minister of Administrative Reform Christoforos Vernardakis. A senior government official noted that an agreement was reached for this year, with one recruitment in the public sector for every five departures. Next year it will be 1 for every 4 departures, the year after 1 for every 3 and so forth.

It was also noted that there is the possibility for 6,500 recruitments this year, which had not been carried out in previous years. This does not include the case where court decisions have mandated recruitments.

An agreement was also reached for the government to use special fund for Education and Healthcare. Furthermore, European decisions allow for further recruitments in the public sector, such as in Healthcare. In Greece doctors work 75 hours, more than the European guideline of 45 hours, meaning that new doctors may be hired.