Historical telescope to re-operate at National Observatory of Athens

One of the first telescopes of the National Observatory of Athens, the Dorides telescope, is yet again at the disposal of those… 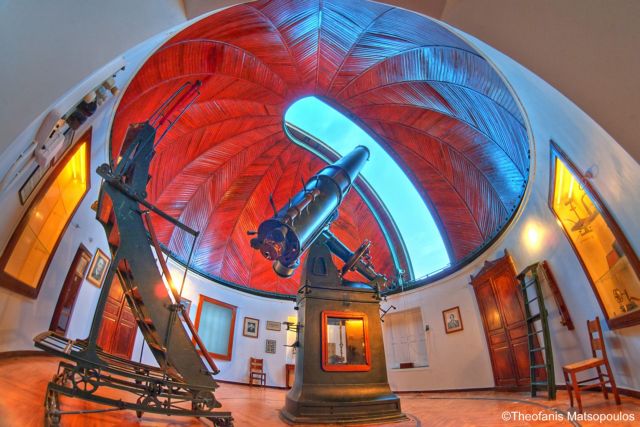 One of the first telescopes of the National Observatory of Athens, the Dorides telescope, is yet again at the disposal of those who wish to enjoy the Attica sky from the Nymph’s Hill at Thisio, right across from the sacred rock of Acropolis. OTE and COSMOTE undertook and implemented the restoration work for the telescope itself, as well as the upgrade of the building in which it is housed.

For almost half century the Dorides telescope was essentially decommissioned because of the lack of resources for its maintenance and restoration. The telescope is named after D. Dorides, a French citizen of Greek heritage who funded the manufacturing of one of the first Athens Observatory telescopes; a refracting telescope with a 40 cm. lens and a focal length of 5 meters.

Following a request from the National Observatory of Athens, experienced technical staff from ΟΤΕ and COSMOTE undertook the assessment and restoration of the electromechanical and structural problems of the telescope, the building, and the dome, proceeding with their renovation, maintenance and water-proofing.

The telescope, featuring a 40 cm.-in-diameter lens, was manufactured by the French Gautier company and was used for the first time during the solar eclipse of August 30th, 1905. It was the largest telescope in Greece until 1959, when the Newall with its 62.5-diameter lens was installed in Mount Pentelicus.

In addition, in order to provide easy access to the building housing the Dorides telescope, a study was prepared for supplying electricity and lighting to the path connecting said building with the main National Observatory. The OTE and COSMOTE electricians, mechanical engineers and technicians participated with pleasure at the project, demonstrating added eagerness due to its particular nature, while the final result vindicated their effort.

The Dorides telescope restoration constitutes yet another corporate responsibility action, in which OTE and COSMOTE employees are actively participating, thus contributing to the preservation and promotion of our cultural heritage.