WSJ: “Samaras wants to scare voters, rather than persuade them”

The Wall Street Journal has published two articles on the recent political developments in Greece, commenting on Prime Minister… 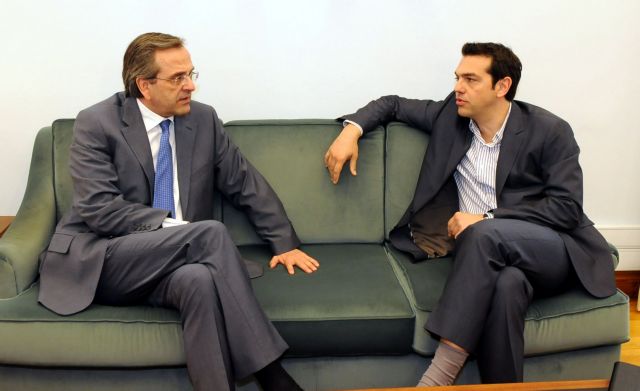 The Wall Street Journal has published two articles on the recent political developments in Greece, commenting on Prime Minister Antonis Samaras’ fear-mongering and the economic consequences of SYRIZA assuming power.

In the first article, the WSJ argues that the Prime Minister is opting to scare Greek voters rather than even attempt to convince them of his plans. The author estimates that the decision to bring the critical Presidential election forward was a trick to curb SYRIZA’s ever-increasing popularity, which is fueled by proclamations of ending the austerity.

The article points out that while the Greek government has had to carry out profound cuts in pensions, wages, healthcare and education, in an effort to reduce the cost of borrowing and improve the economy, almost no Greek politician – including the Prime Minister – as tried to convince taxpayers of the benefits in adopting the painful reforms. On the contrary, it is highlighted that Mr. Samaras blocked some critical reforms in order to appear as if he is acting independent to the troika.

The author adds that while in 2010 Mr. Samaras vehemently opposed the bailout, he won the elections in 2012 after becoming a major supported of the bailout. The article concludes that it “would help” if European leaders became “better at democracy”, rather than fear it.

The other Wall Street Journal article focuses on SYRIZA and maps its transformation from the 2012 elections, having become a moderate, pro-Europe party that aims to avoid generating large budget deficits and maintaining the public sector. The main opposition party has consistently stressed the importance of reducing the debt via negotiations. There are however doubts as to whether Alexis Tsipras will succeed where Antonis Samaras has failed.

According to the article there are three schools of thought regarding the possibility of Mr. Tsipras becoming Prime Minister next year. The first claims that he will lose his struggle against the troika, resulting in the expulsion of Greece from the Eurozone. The second group of observers believes that once elected Mr. Tsipras will follow the Greek tradition of rejecting the more foolish policies and extreme demands – just like Mr. Samaras did in 2012. The final group of observers believes that Mr. Tsipras will eventually make a major turn, with investors hoping in a delayed recovery and reduction of unemployment.