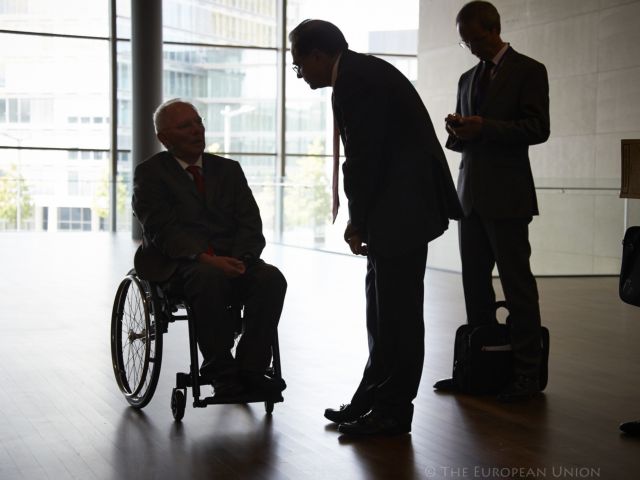 The Minister of Finances Gikas Hardouvelis has arranged an emergency meeting with his German counterpart Wolfgang Schäuble in Berlin at 6:30pm on Wednesday, on the sidelines of the OECD forum taking place in the German capital.

The two Ministers are expected to discuss the ongoing troika review of the Greek rescue program, along with the preventative credit line, which will support the Greek economy in 2015. Athens is expected to pressure for a tailor-made supervisory program which will not include a MoU agreement (Memorandum of Understanding), a term that is included in the ESM’s precautionary financial assistance credit lines (PCCL/ECCL).

The Greek side will claim that the EFSF’s 11.4 bullion euros and the 5 billion euros that the government has available along with a new program of commitments and reforms will be enough in order to avoid signing a new MoU which will entail the further implication of the IMF. Any such decision though will depend on the troika’s review, which will greenlight the payments of 7.1 billion euros to Greece from the EU and IMF.

Upon his return from Berlin Mr. Hardouvelis will have to convince the troika to return to Athens by pushing forward a series of reforms that have yet to be implemented. Technically the Greek program ends in December, however if the troika’s review is not complete by the end of the year then a 1.9 billion euro tranche from the EU will not be paid out, as there are no provision for the new year. Greece is also expecting about 2 billion euros in profits EU members made from trading Greek bonds.

The main problems in the current negotiations with the troika are the reforms in insurance (new pension cuts), labor (collective dismissals, union legislation, and lock outs) and the VAT. The troika has also warned of a 1.5 to 2 billion euro fiscal gap in 2015 and that there are significant delays in carrying out 5,500 dismissals in the public sector and upgrading the tax auditing mechanism.