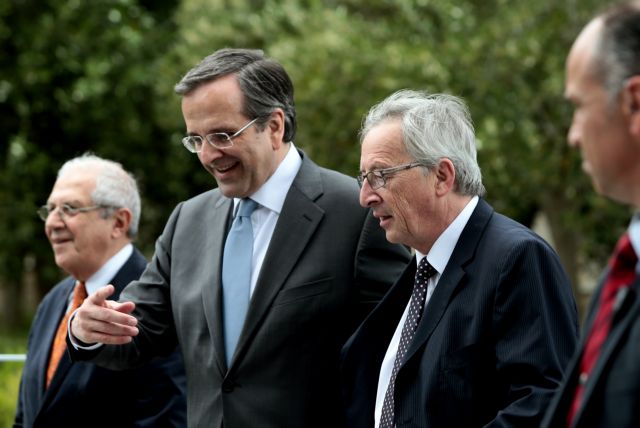 The new president of the European Commission Jean-Claude Juncker is in Athens on Monday for a scheduled meeting with Prime Minister Antonis Samaras at noon, followed by a lunch with government Vice President Evangelos Venizelos and the new Commissioner Dimitris Avramopoulos.

Prior to his departure for Athens, Mr. Juncker stated that his goal as Commission President is see Greece return to growth and sent a message of hope and optimism, in recognition off the Greek people and government’s efforts and reforms.

In the press conference that followed, the Greek Premier praised the European Commission president’s efforts to tackle the crisis and his faith in Greece. Mr. Juncker commented that Mr. Samaras was a friend and colleague and that his top priorities are employment, growth and investments.

The Prime Minister’s associates have underlined that Mr. Juncker has had a close ally to Greece since the start of the crisis, arguing that he had consistently supported Greece’s Eurozone membership, even coming to blows with Berlin in July 2012 over the matter.

During his stay in Athens, Mr. Juncker will also discuss the portfolio that Mr. Avramopoulos will be assigned, with Greece having requested the critical and newly-established immigration portfolio. When asked by journalists, the European Commission President avoided elaborating on the subject, adding that Greece will not be disappointed.