The Athens Concert Hall held a function yesterday, where the Prime Minister Antonis Samaras presented his proposals for changes to the Constitution… 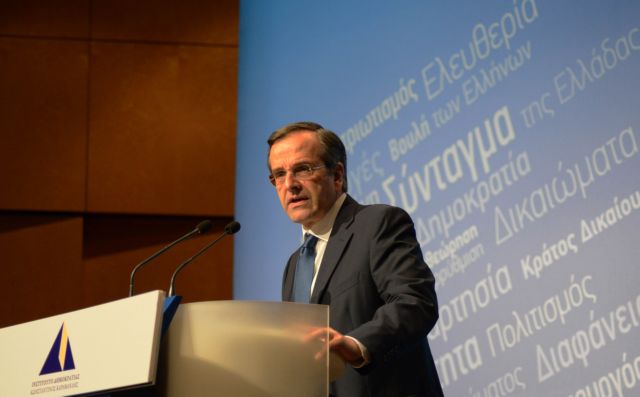 The Athens Concert Hall held a function yesterday, where the Prime Minister Antonis Samaras presented his proposals for changes to the Constitution. Mr. Samaras explained that “the current Constitution has run its cycle” and claimed it was time for radical changes.

The PM took the opportunity to launch an attack against SYRIZA and to officially launch New Democracy’s election campaign for the local government and European elections. New Democracy vice president and Minister of National Defense Dimitris Avramopoulos was also present at the event.

Mr. Samaras presented 30 proposals, amongst which are the direct election of the President by the people, introducing permanent Deputy Ministers of Foreign Affairs, National Defense and Budget (with a five-year term), abolishing surplus general secretariats, reexamining regulations of criminal liability for ministers, reducing the number and benefits of MPs, establishing a Constitutional Court and allow the operation of private universities.

New Democracy’s VP explained that the proposals aim to address the need for another rule of law, while ensuring social cohesion and justice, national dignity and developing a safe investment environment that will promote growth and transparency, while restoring credibility and trust.

Mr. Avramopoulos noted that the “New Democracy does not monopolize the love for the country” and stressed the importance of the broadest possible consensus in the Constitutional review. Mr. Avramopoulos called the other parties to respond to his invitation to “set strong foundations for the future of our land and society”.