Scientists conclude that Alykanas “ruins” are a natural phenomenon! 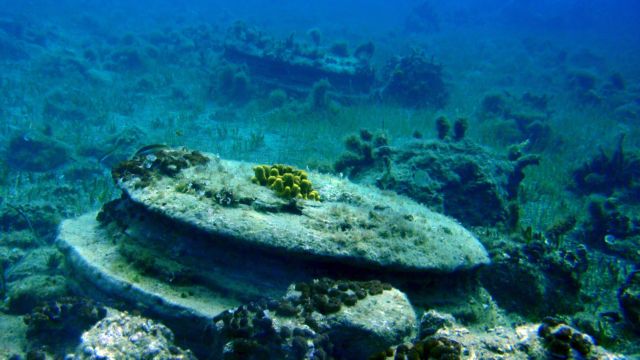 The rocky formations discovered in late May at the bottom of the Alykanas gulf in Zakynthos are not the ruins of an ancient settlement, as originally thought, but rather a rare natural geological phenomenon from at least 5,000 years ago.

Dr. Michael Stamatakis, along with archaeologist Magdalene Athanasoula and technical expert Petros Tsampourakis conducted a study on the findings, which were publicized on Wednesday by deputy Mayor of Zakynthos Akis Ladikos.

The report indicates that while the findings are not man-made, there was no evidence of any other similar geolofical formations elsewhere. Dr. Stamatakis who has been documenting the geological history of the island joined the team to help shed some light on the findings’ origin.

Chemical and mineralogical tests conducted showed that calcium, magnesium and iron carbonates were plentiful, which are typically created around vents that go through loose deposits of aluminosilicate minerals.

The deputy Mayor explained that this is a unique phenomenon world-wide and that further tests will be conducted to determine the age of the findings, while noting that it could generate scientific and tourist interest.