Downgrading forecasts and the consequences of the war 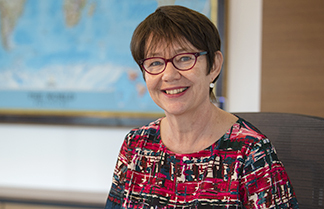 The president of the European Bank for Reconstruction and Development (EBRD), Odile Renaud-Basso, assesses the progress of the reforms in Greece as particularly impressive, speaking exclusively to the Athenian-Macedonian News Agency.

“There has been a huge reform agenda implemented by the current government,” Ms. Renaud-Basso said, referring to the progress made in matters of digital transition in public administration, in the governance of public companies, such as PPC.

“The reform process has been very serious, very credible and Greece’s ability to attract international investors has changed completely. Particularly symbolic of this was the acquisition of Viva Wallet by J.P. Morgan “, noted the president of the EBRD.

Although revised for the worse, due to the current crisis, the EBRD forecasts for the growth of Greek GDP this year are 2.9% and 3.5% for 2023. At the same time, as the president of the bank pointed out, during the meetings with the Greek government it became clear that the goal of de-lignification and the green transition of the country remains unchanged, both in terms of central targeting and strategies as well as timeline.

Following is the full text of the interview given at the 7th Delphi Economic Forum by the President of the EBRD, Odile Renaud-Basso, to the Athenian-Macedonian News Agency and NG Drossos.

Q. The European Bank for Reconstruction and Development (EBRD) funds a number of large and small projects in Greece, including the energy sector. What are your assessments regarding the effects of the current crisis on the development of the Greek economy and the future of these programs?

A. The current war-related crisis [in Ukraine] will certainly have repercussions everywhere. That, I think, is clear. It will, of course, have a huge impact on the development of Ukraine, it will have a huge impact on the development of Russia and it will of course have an impact on neighboring countries. Overall, there will be impacts on the global economy and in countries like Greece, mainly through energy prices. As there is a big shock in fuel prices. So we revised our forecasts for Greece, as the country continues to emerge from the pandemic with very strong growth, last year, and so we continue to see growth in clearly positive ground in 2022 with 2.9% and 3.5% for 2023 but of course lower than would normally be the case, i.e. without the crisis.

Q. To what extent? How much was “deducted” from your forecast?

A. 1% was deducted but as you say we have been very involved in the energy sector, for the transformation of the energy sector, and I believe that there is a huge transformation of the sector, guided by the very clear strategy of the government, through de-lignification, development of Renewable Energy Sources (RES), as it applies to key companies in the energy sector, PPC, ELPE, and we believe that the direction and the main targeting will remain and the companies to which we refer will remain in their targeting. So there may be some short-term effects of lignite adjustment in the very short term, but the focus, strategies, timeline, etc., I think remain.

Q. So, Mrs. Mr. President, the central axis is that you will continue your policy “as is” in relation to Greece and that the “to and fro” in the energy sector with the case of lignite, which you mentioned, will not affect current investments.

A. We are not investing and we are not going to invest in this sector (lignite) and I do not think there will be new investments in this sector but we are financing renewable energy sources and the sustainability policy for companies [of the sector] ( refinancing, green bond issues for PPC, etc.). This will continue and I think the current situation will boost investment in RES and this country has huge potential in this area.

Q. Were these issues addressed during your recent contacts with the Greek government?

Q. And what were the main conclusions?

A. Maintaining direction, maintaining targeting, target dates, etc. Demonstrating some flexibility in the short term. Given the risks associated with Greece’s dependence on Russian gas, it is perfectly understandable to address urgent needs, but the strategy remains the same. Promoting renewables (energy sources) and de-lignification remains the central strategy.
Q. Will there be a change of policy on the part of the EBRD in the post-war period in Ukraine?
A. Do you mean in Greece or…
Q. Overall.
A. The war in Ukraine has a big impact on the bank. The first effect is that we have officially suspended access to EBRD resources in Russia and Belarus. We have not been involved in Russia since 2014, when we stopped providing new funding because of the Crimean case, but in Belarus it was later, in 2020-2021.
So, (now) we are completely suspending funding, not only new but also existing, and we have closed our offices in Minsk and Moscow, which is a big step.
The other dimension is that now our focus is on tackling the crisis in Ukraine and seeing how we can support both the country and its neighbors in the short term. There is no shifting strategy but managing emergencies.
Q. Will further assistance be provided to Ukraine on favorable terms? Will there be help in reconstruction?
A. We have not yet reached the stage of reconstruction. We remain in the state of emergency. We are helping the country so that it can continue to function during the war. Our main goal, because we are a bank targeting the private sector, will be to fund programs that will help keep the economy “afloat”.
It is in a state of war and the economy has collapsed due to lack of resources etc. What we will do is to finance trade, facilitating imports and exports, the food sector, facilitating the production of fertilizers, given the importance of the sector. As you know, Ukraine and Russia produce 30% of the world’s wheat and the production process must continue, which is why we provide emergency funding.
We have also provided financing to the electricity generation company, as they need liquidity – working capital, to keep the company in operation and the same for the railways.
Thus, we mainly target the most important economic activities so that the economy remains in operation, the citizens have electricity, food, etc.
To do this as a bank we take risks, as they are loans which of course require some guarantee. The situation is wartime and therefore more dangerous than normal and collateral is required but we are focusing on this issue (in terms of support) at the moment.
Once the hostilities are over, of course, there will be huge needs for reconstruction and for this process there will be a need for certain loans, for the reconstruction of cities, etc., but also for financing, lending and we will focus on the reconstruction of basic infrastructure.
Ukraine is a very important country for us. Before the crisis, before the war, we invested one billion euros a year in Ukraine and we were very involved in the reform of the country, in the fight against corruption, in the strengthening of the justice system, etc. And this will also be very important in duration of reconstruction.
Q. Were you satisfied with progress on this agenda before the war?
A. Yes, there has been some progress, sometimes there have been setbacks, but it has not been an easy agenda. These are reforms that are difficult to implement, the government was under various pressures, etc.
Q. It was not an easy task.
A. It was not. But there was progress.
Q. To return to the discussion in Greece, does the EBRD offer know-how to the Greek banking system and in which part of its operation do you find problems?
A. We have been working very closely with the banking sector, since 2015, to provide assistance with the various stages of the reform (of the banking system), capital, to manage the issue of non-performing loans, the securitization of non-performing loans, building capital adequacy ratios (tier 2 capital), commercial financing, and we are now working with them on the Recovery and Resilience Fund (RRF).

So, it is not really about technical assistance but about very close cooperation on a number of issues and I think we have now moved on. The progress made with non-performing loans is impressive and we are very positive about the progress we have seen in the banking system. Of course the challenge of change continues, with a greater emphasis on the digital transition as well as the financing of the economy but I think we are moving forward normally. At the same time, we support issues (securities) in the Greek market, not only for banks but also for the private sector.Q. Do you share the assessment that the current crisis is having a negative effect on the promotion of reforms in Greece?

A. We see that the government has implemented a huge reform agenda. I was particularly impressed by the (progress in) the digital transition, in management, we also discussed the “green agenda” which is a huge reform, the progress that has been made in the governance of public companies. When you see the transformation of PPC it is very impressive.

The reform process has been very serious, very credible and Greece’s ability to attract international investors has changed completely. Particularly symbolic of this was the acquisition of Viva Wallet by J.P. Morgan.

Of course, when faced with successive crises, such as the pandemic, energy prices, new challenges for economies, etc., but I think the government’s response in terms of providing support to the effects of the pandemic, not only in Greece but in the EU in general, was particularly effective in continuing economic activity and preventing collapse. I think that was the right answer.

Q. In light of your position, the problems are common to all, inflation is hitting everyone, do you think there should be an immediate united European response and then?

A. I think there is a single European reaction to energy efficiency, to the expansion of energy sources beyond Russia. Now in terms of support, I think the good thing about the case, in a nutshell, is that the RRF is now starting to take effect. You know the RRF was created to deal with the pandemic crisis but with all the negotiation, implementation, etc., the disbursement is starting now and so the impact on the economy will now begin.

Earlier the effect was more on boosting confidence, as the fact that there was a single European response to the crisis was a big step forward and gave a very strong signal of confidence, but the investment will now start and I think that will help a lot. So let’s start and see if there is a need for further follow – up. This is something that should be discussed, but I really agree that having a coordinated European response on all fronts is very important. It has been very successful in the pandemic and must continue.