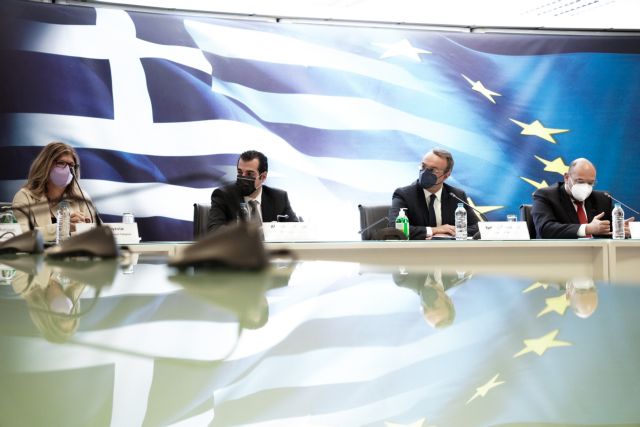 The actions come from the special account for the deposit of donations that was opened at the Bank of Greece in the spring of 2020 with the first wave of the pandemic, by the Ministry of Finance

The financing of four targeted actions in the national effort to deal with the coronavirus was jointly announced by the Minister of Finance Christos Staikouras and the Minister of Health Thanos Plevris.

The actions come from the special account for the deposit of donations that was opened in the spring of 2020 with the first wave of the pandemic, the Ministry of Finance, to the Bank of Greece.

Last March, a total of 2,503,250 euros were raised as donations, in order to prevent and treat the consequences of the coronavirus.

“We work, all together, state, companies, institutions and citizens, with solidarity and cohesion, so that we can face the challenges and difficulties. Hand in hand, public, private sector, and civil society, we will get the society out of the difficult conditions”,  Minister of Finance Christos Staikouras said, among others things. As the minister pointed out, “in this crucial effort, no one is left out. In the climate of global uncertainty that – inevitably – created by the unprecedented health crisis, the government initiative aimed to highlight the importance of national unity and solidarity, as a guide to address the challenges facing our country.

Mr. Staikouras thanked the more than 450 citizens and companies that responded to the call for offer and proved that the Greeks are actively present in the battle, united and in solidarity. He concluded by saying that “the resources they have allocated return to society, cover important needs, are utilized with social sensitivity, transparency, efficiency and respect, even in the last euro”.

The Minister of Health, Thanos Plevris, for his part, spoke about an initiative of the government that it was time to return benefits to society itself. As Mr. Plevris pointed out, during this period the NHS was strengthened with 12,000 auxiliary employees, 2000 permanent staff and 700 ICU beds to deal with the coronavirus pandemic.

Next to this effort, there are synergies from the private sector but also the offers of the citizens, the minister stressed and said that the four actions that were announced concern the Health sectors. The 17 new ambulances -as he said- will contribute significantly to the work of EKAB, the Smile of the Child helps us in prevention, as well as the Greek Red Cross with staffing of vaccination centers and Doctors of the World cover a large part of vulnerable populations and help Ministry of Health.

“We hope that with the continuation of the vaccination coverage, we will have a better new year in relation to the pandemic,” concluded the Minister of Health.

For his part, the president of EKAB ambulance service, Nikos Papaefstathiou, spoke about the burden of EKAB with the pandemic, but fortunately he found it prepared, as he said, as it was reinforced with auxiliary staff. Speaking about the 17 new ambulances, he said that “it is a valuable help to the people of EKAB in order to offer their services to the citizens and concluded by saying that “the pandemic showed in practice that cooperation between the private and public sectors and the partnership of citizens is very important in order for EKAB to remain next to the citizens “.

The president of Smile of a Child K. Giannopoulos, addressing the two ministers, thanked them, saying that “we feel that we have dignity through the work we do” and added: “we are given the opportunity to increase the actions in the mobile medical prevention units” which are available across the country.

Finally, Eugenia Thanou, General Manager of Doctors of the World, said that it is a great honor to help the Doctors of the World who have served for 30 years in Greece and abroad and are by the side of the state and assist in their work concerning sensitive population groups.

The funding concerns the following actions:

Specifically, in each of the seven Health Regions (RIA) of the country two ambulances will be made available, while the three largest RIA – Attica, Thessaly & Central Greece and Macedonia – will receive three ambulances each.

2nd Action: 395,926 euros will be allocated to programs implemented by The “Smile of the Child”, funding:

1st The purchase and equipment of a trailer medical unit, with the ability to provide services both in inaccessible areas of the country and to vulnerable populations, with a budget of 352,036 euros.

The unit will meet the certification specifications and will operate as a multi-practice anti-COVID, in order to assist in the discharge of the National Health System.

2nd An annual coronavirus vaccination program, which, in collaboration with the Ministry of Health, will be implemented through the mobile medical unit of the “Child’s Smile”, with a budget of 43,890 euros.

3rd Action: 104,250 euros will be allocated to the “Doctors of the World”, for programs lasting 6 months, which will concern:

1st The promotion of the need for vaccination and immunization against the coronavirus, with a budget of 24,245 euros.

2nd The provision of health care and psychosocial support to vulnerable elderly people, who are particularly affected by the pandemic, with a budget of 46,505 euros.

3rd The strengthening of the social structures of the country, providing support to both the beneficiary citizens and the front line personnel who serve in them, with a budget of 33,500 euros.

4th Action: 151,000 euros will be allocated to cover the costs of accommodation, travel and overtime compensation of nursing staff of the Hellenic Red Cross, in the context of their assistance to Operation “Freedom”, in accordance with law 4790/2021.

In particular, 50 nurses are expected to assist in the national vaccination program, moving from regional services of the Greek Red Cross, in order to support the two major vaccination centers in Attica, in Maroussi and Glyfada.

The financing of these four actions, with a total budget of 1,881,176 euros, will be followed by the distribution of the remaining donations, amounting – at the moment – 622,074 euros, to additional, targeted social policy actions, which will be announced publicly.

In the special challenges that our country is experiencing due to the pandemic, the State has mobilized, from the first moment, as it should, all the available means and resources for the defense of human life, the protection of public health and the support of the economy, employment and social cohesion.

In particular, the Government, throughout the pandemic, has supported and continues to support households and businesses, through a wide network of measures and benefits, totaling 43.3 billion euros.

“In the climate of global uncertainty that – inevitably – created by the unprecedented health crisis, the government’s initiative aimed to highlight the importance of national unity and solidarity, as a guide to address the challenges facing our country,” said Christos Staikouras.