PM Tsipras to Schulz: “There will be an honest compromise”

The Prime Minister Alexis Tsipras traveled to Brussels early on Friday, where he has arranged to see the president of the… 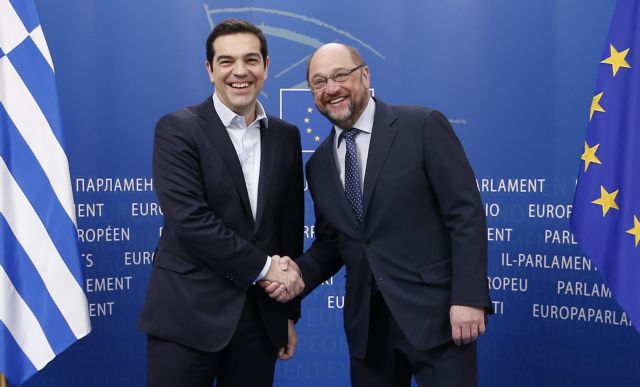 The Prime Minister Alexis Tsipras traveled to Brussels early on Friday, where he has arranged to see the president of the European Parliament Martin Schulz. After their meeting concluded, the two gave a press conference.

The two reportedly discussed youth employment and reforms to encourage investments and job-creation in Greece. Mr. Schulz said that relevant European programs provide 6 billion euros for employment, although more funds can be drawn. He also expressed his confidence that any differences expressed amongst Eurozone members will be overcome.

The Greek Prime Minister on the other hand underlined the need to implement ideas that will help Greece overcome the humanitarian and financial crisis. Mr. Tsipras added that Greece has begun implementing its obligations and demanded that the country’s partners do the same, as it is in everyone’s interest. He concluded that there will be an “honest compromise”.

Prior to the second scheduled meeting for the day, with Jean-Claude Juncker, Mr. Tsipras noted that he was confident a solution would be found to overcome the problems and implement the recent agreements. Mr. Juncker stated that while there has not been any progress, he will make some recommendations to the Greek Prime Minister and concluded that it was time for cooperation, in order to successfully tackle the issues at hand.

Mr. Tsipras is scheduled to meet with the President of European Commission Jean-Claude Juncker and SYRIZA MEP Manolis Glezos later in the day.

The European Commission president recently told the Welt am Sontag that he is in regular contact with Athens, but did not want to initiate negotiations with Athens, while it is still in consultation with its creditors.