Tsipras: “We must end austerity and regain democracy”

A debate amongst the candidates for the presidency of the European Commission was held in Brussels on Thursday evening, with SYRIZA and the European Left… 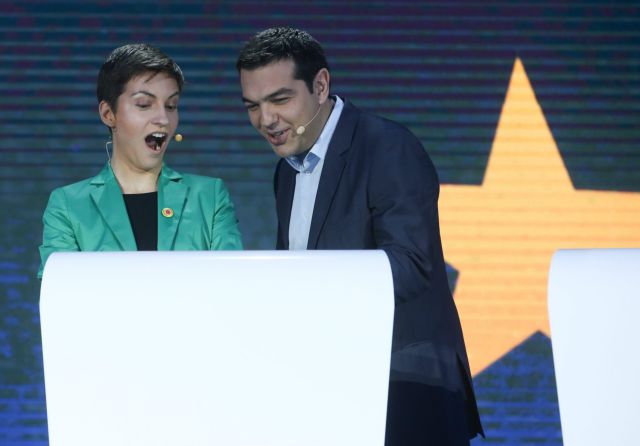 A debate amongst the candidates for the presidency of the European Commission was held in Brussels on Thursday evening, with SYRIZA and the European Left candidate Alexis Tsipras debating with European Peoples’ Party Jean-Claude Juncker, the Progressive Alliance of Socialist & Democrats Martin Schulz, the Alliance of Liberal and Democrats Guy Verhofstadt and the Greens-EFA’s Ska Keller.

In his introduction the Greek politicians urged voters to support the Left party to put an end to austerity and regain democracy and the other founding values of the European Union. Mr. Tsipras opined that the current policies cannot provide any solutions, especially in employment, which is ravaging the European south. Mr. Tsipras stressed that “we need to end austerity and regain democracy” and called for “a European debt conference like the one for Germany in 1953” in order to address the debt problem.

Regarding the Ukrainian crisis, the Greek candidate noted that Europe was “experimenting” again with the Cold War and called for a rejection of the “neo-Nazi government” and to give the opportunity to the Ukrainian people to decide its own future. Mr. Tsipras was in favor of initiating talks under the OSCE and against any military intervention, whether from NATO or Russia.

The ALDE candidate Guy Verhofstadt and Alexis Tsipras argued on the role of the banks in the creation and development of the crisis, with Mr. Verhofstadt attributing the crisis in Greece to the bad choices made by New Democracy and PASOK, which were funded (along with SYRIZA) by state-run banks. Mr. Tsipras conceded that while the state-run banks and public sector played a role in the development of the crisis, the role of private banks cannot be ignored, citing the Irish case.

The SYRIZA leader reported that the European Left respects the right of self-determination and that conflict amongst people and nations cannot have a positive result, adding that a respect for international law is also paramount. Mr. Tsipras favored granting greater autonomy the Catalonia within the framework of a federal community, similar to Ukraine.

On immigration, Mr. Tsipras explained that the current EU policies of suppression are ineffective and that a major overhaul of political asylum policy is necessary. He also called for increased funding and a “fairer sharing” of responsibility. The European Left candidate warned of the dangers from the wave of conservatism and anachronistic beliefs sweeping across Europe.

The Greek opposition leader attributed the huge rate of abstinence to the “democratic deficit” in Europe and explained that while the summits see the participation of 28 leaders, the German Chancellor Angela Merkel’s decisions have the biggest weight. At this point in the debate, Mr. Tsipras questioned Jean-Claude Juncker on recent revelations regarding the 2011 summit in Cannes. The Luxembourgish politician did not respond.

For their closing statements, the candidates offered their vision, with Mr. Tsipras calling for a Europe with more democracy, solidarity and social cohesion, with a greater participation from the people. Mr. Tsipras repeated his intention to get rid of the troika (or “catastroika”, as he quipped).