Tourism: Investment “explosion” in the shadow of the Acropolis

Large international chains and Greek entrepreneurs, who invest mainly in four-star and five-star hotels, are looking for a place in the center of Athens 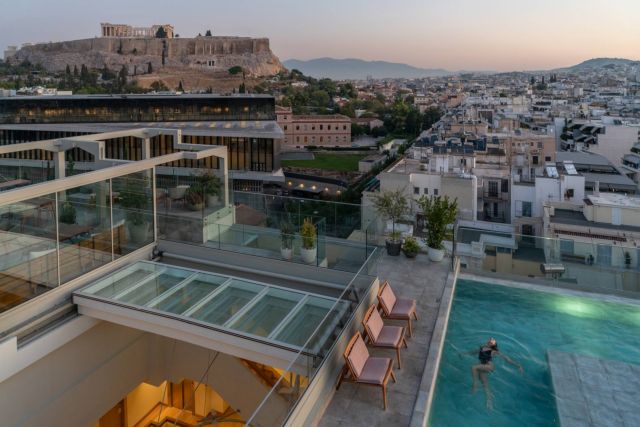 A place on the tourist map of Athens is sought by large international hotel chains and Greek entrepreneurs, who invest mainly in four-star and five-star hotels with the Acropolis in the background. The two years of the COVID-19 pandemic did not stop the investments in the hotel sector, which, this year alone, is expected to exceed 2 billion euros, further upgrading the tourist product of Athens.

In particular, in the center of Athens, after the operation of the five-star “Athens Capital Center Hotel MGallery” (in collaboration with the hotel giant Accor), some other important hotels are exoected to operate in the same region, namely the “Xenodocheio Milos”, the “Anda Hotel Athens”, a member of Radisson Individuals in Kolonaki and the new project of the Lebanese of Yazbek in the building of HAN in the Academias Street.

At the same time, the Brown Hotels chain is evolving into a particularly strong “player” in the center of Athens and especially around Omonia Square. The company that already operates Brown Acropol, recently inaugurated Lighthouse and Dave Red Athens, while preparing another unit on Evripidou Street as well as the reconstruction and revival of Sans Rival on Liosion Street. A hotel is also being prepared at the junction of Lykourgou and Socratous streets, while the investment of Prodea and Dimand-EBRD for the reconstruction of the Saroglio Megaron in Omonia begins, with the Moxy Hotels brand of the Marriott group.

Within 2022, the hotel “Esperia” returns to the hotel scene of Athens with a new name. The former “Esperia”, which closed in 2010, is already being transformed by the Fattal into a five-star “Nyx Athens”, aiming to be a reference point for the wider area, as it is located in one of the best places in the center of Athens.

On Syggrou Avenue, the “Grand Hyatt” is expanding and, within 2022, it will be the second largest hotel in Athens, in terms of capacity and conference space, along with the “Athenaeum Intercontinental”. The project belongs to the American real estate company Hines, which, in collaboration with the European real estate investment platform, Henderson Park, made the first opening in the hotel real estate of Athens, in 2017, when they bought the former hotel “Athens Ledra” of Syggrou for the creation of the first “Grand Hyatt” of the Greek capital. After the purchase of the neighboring “Odeon Starcity”, the “Grand Hyatt” will eventually be a unit with a capacity of 550 rooms (from 309 today), while the “Intercontinental”, also on Syggrou Avenue, has 563 rooms.

The international chain of Hilton hotels extends in Kifissia and Piraeus, giving its name, respectively, to the historic hotel Pentelikon as well as to a property in Kastella that will function as a luxury hotel unit, with a view on Mikrolimano. Hilton and the SCD LTD group of Theodoros Douzoglou announced yesterday their plans for the operation of two hotels in Attica, as part of a property management agreement owned by SCD. The deal comes just two days after the closure of the Hilton Athens for its major renovation and its reopening as Conrad and Waldorf Astoria. The historic hotel Pentelikon in Kifissia, with 117 rooms, will be the first hotel of the Curio Collection by Hilton in mainland Greece. At the same time, Hampton by Hilton Piraeus in Kastella, with 83 rooms, will be the first Greek Hampton property to operate in Piraeus. Both new hotels are expected to open in 2024.