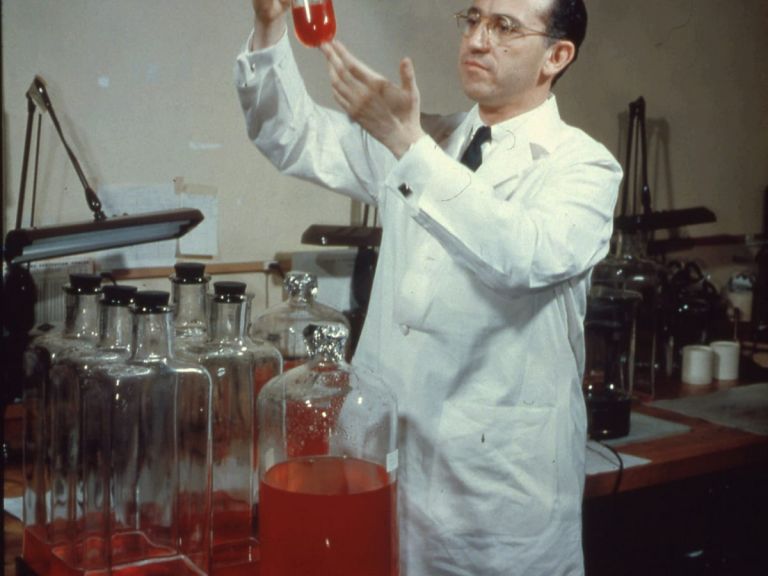 Big Pharma collaborates with large, publicly universities and research centres and the top-level scientists (often trained at public educational institutions) that work there.

Sixty years ago humankind was confronted with another great epidemic. It was called polio.

Then, too, a great race was required to produce a vaccine to protect against a disease that afflicted mainly children.

The contribution of scientist Jonas Salk (photo) was decisive. When a journalist asked him who has the patent he famously replied, “There is no patent. Can you patent the sun?”

That was another age with different mores, you will say. Surely, but it points in a certain direction.

I am well aware of the counter-argument – that today scientific research is conducted mainly by big, private pharmaceutical companies and that the bulk of the cost derives not from production but from research and development and hence patents allow companies to recoup their large investment in knowledge and research on pioneering therapies.

Yet, at the same time there are other parameters of the issue that often are omitted from the debate.

Big pharmaceutical companies receive big public subsidies for their research either from nation-states or the EU.

They collaborate with large, publicly universities and research centres and the top-level scientists – who were often trained at public educational institutions – that work there.

It is public health systems globally that ensure that there is a constant market for pharmaceutical products.

Above all, there is a moral issue. Right now we face a global crisis.

The return to normalcy internationally requires that we limit the toll in terms of human lives and avert an economic catastrophe and that, in turn, requires mass vaccination on a global scale.

That means we must produce the maximum possible number of vaccine doses as swiftly as possible.

To do this one must remove any obstacles that exist – including patents.

Yet there are other parameters to the issue as well.

Undoubtedly, business competition in many ways advances innovation and thus contributes to social progress overall. That explains why there can be no economic system without some sort of market.

At the same time, the market cannot be the measure of all things, because although it may unleash forces it also raises barriers of property.

In the process of producing new knowledge – and indeed knowledge that saves lives – there must not be barriers.

In the final analysis, the more knowledge is produced and disseminated the more it can be utilised by the forces of entrepreneurship in the end.

That can produce a most useful synergy for our common future.

It points to a new balance between entrepreneurial research activity and the fact that knowledge in the end must belong without distinction to all of humankind.

It is a balance that is exceedingly necessary in an era of great challenges.