Greece hunkers down to limit spread of COVID-19 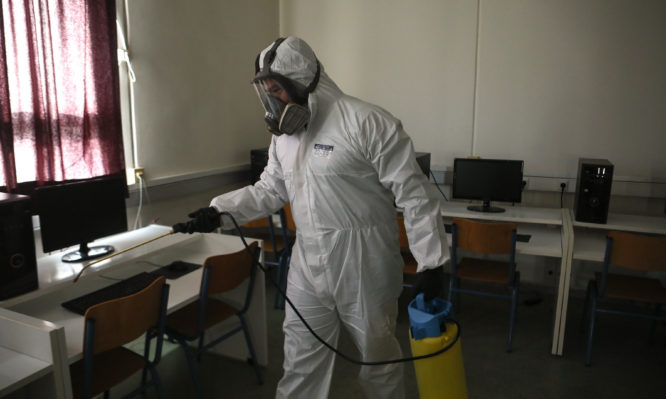 Kikilias said school closures are a preventive measure designed to limit the spread of the virus to the community and that the state wants to support working parents and businesses harmed by the measure.

With all of neighbouring Italy having been confined to their homes the Greek government took the drastic move of shutting down all schools and universities nationwide.

The measure was announced by Health Minister Vasilis Kikilias and signals that the state is prepared to take radical measures to curb the spread of the potentially deadly coronavirus.

The measure (which will initially be in effect for two weeks) covers all schools and universities – public and private – nationwide from daycare centres to universities.

Kikilias said this is a preventive measure designed to limit the spread of the virus to the community.

The minister said the state wants to support working parents and businesses harmed by the measure.

He said parents must limit the movement of their children to limit the spread and stressed personal responsibility.
“It is the moment when we Greeks must exhibit responsibility,” he declared.

The ministry announced on 10 March five more confirmed cases, four of which had come into close contact with individuals who had already been registered as COVID-19 virus cases. Another is a traveler from London, who brings the total number to 89 cases in Greece.

Competent health authorities are also seeking the first transmitter in four undetermined cases in Attica involving individuals who are over 60 that are not linked with other cases in Greece.

The cases were identified after the change in the definition of “case” which is changing often.

New measures for vulnerable groups, stay home
Professor Sotiris Tsiodras who acts as spokesman for the government in conveying to the public scientific data and discoveries gave an analytic list of categories of citizens that are considered vulnerable as regards contracting COVID-19:

2. Strict adherence to hygiene measures and to the ban on visitors at Intensive Care Units (ICUs) at hospitals

3. Provision for prescriptions for those suffering from chronic ailments until 30 June so as to avoid the virus

4. Suspension of cultural and artistic events in both closed and open spaces with 1,000 people or more

5. Strict enforcement of hygiene rules at gatherings of up to 50 people and urging teleconference meetings so as to play it safe

6. Ban on all flights until 23 March to and from Northern Italy from all Greek airports