Seven dead, over 100 injured in disastrous ‘supercell’ storm in Halkidiki

Prime Minister Kyriakos Mitsotakis, whose government was sworn in this week after winning elections on July 7, cancelled his schedule and was being continually briefed, a government official said. 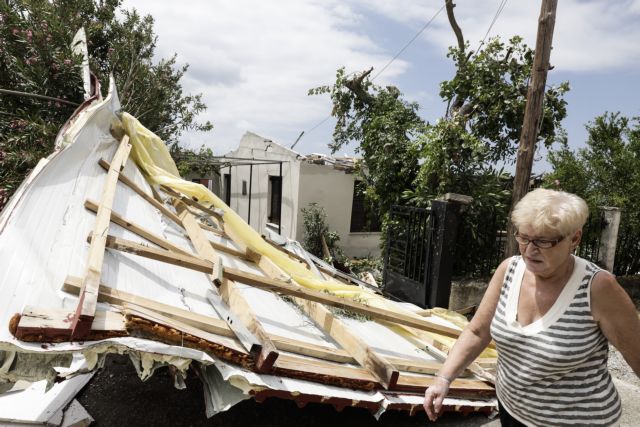 At least seven people, including six tourists, were killed and more than 100 others injured when a violent, short-lived storm lashed northern Greece overnight, felling trees and ripping off rooftops.

Witnesses said the storm had come and gone in a matter of minutes. Winds of over 100 kph (60 mph) were reported on the Halkidiki peninsula, popular with tourists in the summer.

A woman and an eight-year-old boy from Romania were killed when a roof collapsed on a restaurant in the beach resort of Nea Plagia. And a man and a young boy, both Russians, died when a tree fell near their hotel in the seaside town of Potidea, authorities said.

A seventh, unidentified victim’s body was found in the sea.

“It was so windy …it is really disastrous,” said a Serbian tourist who gave his name as Bratislav.

The storm was a “supercell”, Theodoros Karakostas, a professor of meteorology and climatology at Aristotelion University, told the state Athens News Agency. “It’s a rare phenomenon,” he said.

Supercells are the least common kind of thunderstorm, but the most violent.

Nefeli Minovgidou, a Greek tourist, described the scene as chaotic. “Chairs were flying everywhere, trees were falling .. everyone inside was screaming, it was chaos,” she told Reuters.

Streets in the area were dotted with uprooted pine trees and overturned motorcycles. Wooden rooftops were torn off and dumped on beaches. A Reuters correspondent saw sun loungers strewn in mangled heaps with other debris across Nea Plagia’s beaches.

Prime Minister Kyriakos Mitsotakis, whose government was sworn in this week after winning elections on July 7, cancelled his schedule and was being continually briefed, a government official said.

Civil Protection Minister Mihalis Chrisochoidis, at the scene, said Greece was mourning the loss of life, adding: “In coming days all damage will be repaired.”

Such severe storms are unusual in Greece, where summers are usually hot and dry. But the tragedy had echoes of a wildfire almost a year ago that raced through the resort of Mati with little warning. Fanned by hot winds, it trapped many inhabitants before they could flee and killed 100 people.

“It is the first time in my 25-year career that I have lived through something like this,” Athansios Kaltsas, director of the Nea Moudania Medical Centre, where many of the injured were treated for fractures, told Greek television. “It was so abrupt, and so sudden.”

Kaltsas said patients taken to the clinic ranged in age from eight months to over 70. Some had head injuries from trees and other falling objects.

Authorities said around 100 people, mostly tourists, had been injured, and 23 had been admitted to hospital. There were widespread power cuts.