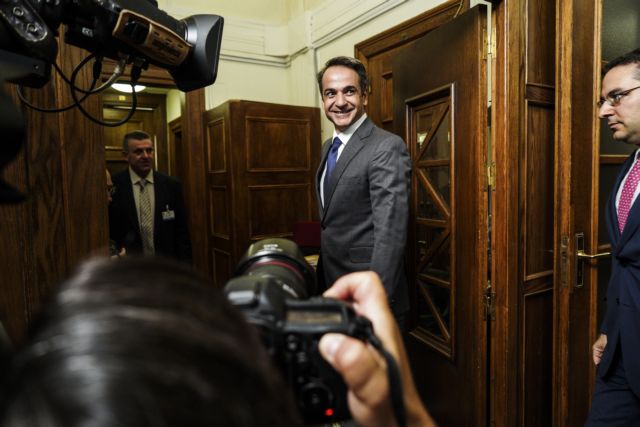 There will be constant communication with ministers and ministry general secretaries to support and coordinate their work through a surveillance mechanism in order to meet government targets.

A combination of transparency and efficiency is at the centre of the “new model of governance” described in a thirty second video that incoming Prime Minister Kyriakos Mitsotakis has posted on his Facebook account.

The video shows a dossier with the state emblem embossed with the words “Hellenic Republic” opening to reveal a list of tabs numbered one to ten, a sort of a Decalogue of good government practices.

“Today all ministers received a dossier with our objectives in all ministries, our action plan running through December, and a six-month list of initiatives. The government will operate with strict timetables and constant evaluation,” the PM wrote on FB.

The video includes the message, “As of today the model of governance is completely changing. Every minister receives an envelope with the strategic plan for his or her remit which outlines our central targets, timetables, working groups, and the necessary support. We are planning, implementing, and evaluating our policies with a single objective, to make the lives of citizens better”.

Ministers were given detailed information on how the work of ministries will be monitored and the collaboration of the various levels of the state bureaucracy.

The PM’s office will play a crucial and overarching role in monitoring targets and effectiveness in all of the ministries.

There will be constant communication with ministers and ministry general secretaries to support and coordinate their work through a surveillance mechanism in order to meet government targets.

Each ministry will prepare an annual programme of government policy that will always take into account state budget projections and constraints.

There will also be an annual hiring plan.

As previous governments have done, this one also is promising to reduce the numbers of civil servants who are recalled to work in the offices of ministers, MPs, and state services.

There will also be a ban on ministers and officials hiring first or second degree relatives.

The ministers, deputy ministers and various government secretaries will be barred from all manner of state contract, and the same applies for their spouses and children under their protection.

The new government coordination information system will be updated with all the works and actions that comprise the government programme and it will play a crucial role in:

Reviewing the programming of every action based on planned timetables

Issuing progress reports on the course of all programmes

Supporting the updating of programmes with the addition of new works/projects during the government’s four-year term.

‘Presidency of the Government’

The aim of the ‘Presidency of the Government’, essentially an oversight and monitoring organ, will be to support the work of ministries, to coordinate and oversee government work, and to support the preparation of legislation.

It will be headed by the Deputy Minister for Coordination of Government Work and general secretariats will focus on various areas of the government’s work.

The Presidency of the Government will have one liaison for each ministry to support the government’s work.

Each ministry will also have an official responsible for the management of the programme and maintaining an open line of information between the ministry and the support mechanism.