In 2018, the Open Society Foundation’s budget was approximately one billion dollars US, of which 81.7mn were earmarked for Europe 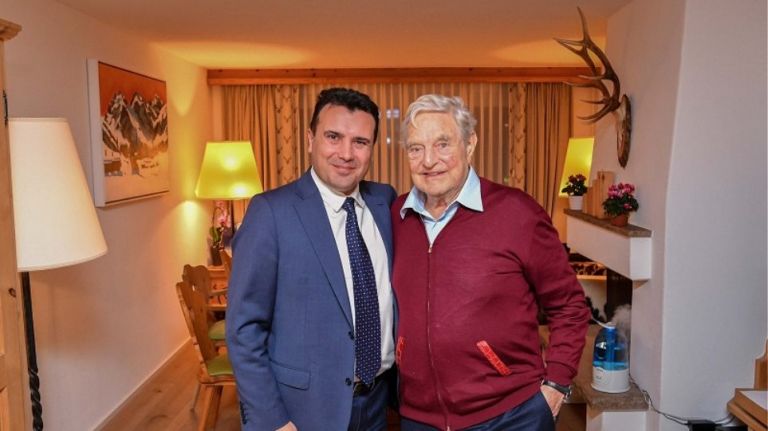 Contemporary diplomacy is not just a matter for states. A crucial role is played by private individuals and “civil society” groups, often using the services of diplomats, politicians, and academics without the limitations of regular government officials.

From American think tanks which have played an important role in determining US policy and rely on private donors,  to the mushrooming of NGOs in all the global hot spots, there are countless examples of the “privatisation of diplomacy”.

That is where George Soros comes in, as became apparent with the Prespa Agreement issue.

By American standards, Soros is “progressive”.  However, he is the herald of a kind of “humanitarian imperialism”, which was a concept discussed at the time of the Clinton administration.

Soros’ path in this area – he was already well-known as a trader – begins not only with the establishment of the Open Society Foundation in the early 1990s but also with the 1995 establishment of the International Crisis Group (ICG) with a crucial grant from Soros, during the crisis in former Yugoslavia.

ICG’s most characteristic report in the 1990s was one written about Kosovo in 1998 in which it argued in favor of NATO intervention, which indeed occurred in 1999.

When the communist regimes collapsed, the aim was to reconstruct both political institutions and civil society.

That was not easy for official Western state structures to undertake. How would it be done? It would be achieved by assigning a decisive role to NGOs, such as Soros’ Open Society Foundations, a name that referred back to Karl Popper and his concept of the open society in his seminal book – The Open Society and its Enemies.

The Foundation and its subsidiaries have played their own role.

On need only consider the fact that through 2017 Soros has spent approximately US 12bn dollars on such activities.

In 2018, the Open Society Foundation’s budget was approximately one billion dollars US, of which 81.7mn were earmarked for Europe.

The Open Society Foundation stepped into the Former Yugoslav Republic of Macedonia very early on. Indeed, from the start it chose to call our neighbouring country just plain Macedonia.

Soros personally gave a loan to FYROM in 1993 so that it could confront the country’s economic crisis. In 1994 he subsidised airlifts of farming produce to Slovenia (during the period that Greece had imposed an embargo) so that farming produce could reach the European market. He also funded schools and other projects.

The Open Society Foundation expressed a strong interest in FYROM, especially after the ethnic strife and Albanian insurrection which led to the Ohrid Agreement. It took a stand in favour of Skopje’s Nato and EU prospects as many of its reports show, and was critical of Russia and of the stance of Greek governments since 2008.

It was also critical of FYROM’s nationalist VMRO party in recent years.

In March, 2017, six US Senators sent a letter to then US Secretary of State Rex Tillerson asking why the government’s foreign aid branch, the United States Agency for International Development (USAID), gives large sums to the Open Society Foundation in FYROM, which according to the senators’ charges was backing left-leaning organisations and media.

During the same period, the US organisation Judicial Watch charged that between 2012 and 2016 Soros’ Foundation received 4.82mn dollars, and that in cooperation with the Obama administration’s Ambassador to Skopje, Jess Baily, it used that money to destabilise the “centre-right government” (the Gruevski government).

Paving the way for Zaev?

The overarching charge is that the Foundation intervened to secure Zoran Zaev’s rise to power, as he was more receptive to a Prespa-style settlement.

As we all know, a few months later exploratory talks began between Athens and Skopje. Those led to the negotiations that produced the Prespa Agreement.

From the very start the Open Society Foundation lent its weight and influence to sway the public in FYROM to support the accord.

Its stance illuminates the complex manner in which one defines “international players” today. They are not limited to governments or formal international organisations. They include the pro-active behaviour of “private entities” which promote the basic designs of the West.