Reports in Skopje indicated that Zaev was given a 7 June deadline, by which time he will first contact UN mediator Matthew Nimetz and then the Greek side to say whether he accepts the package settlement that was agreed to in principle 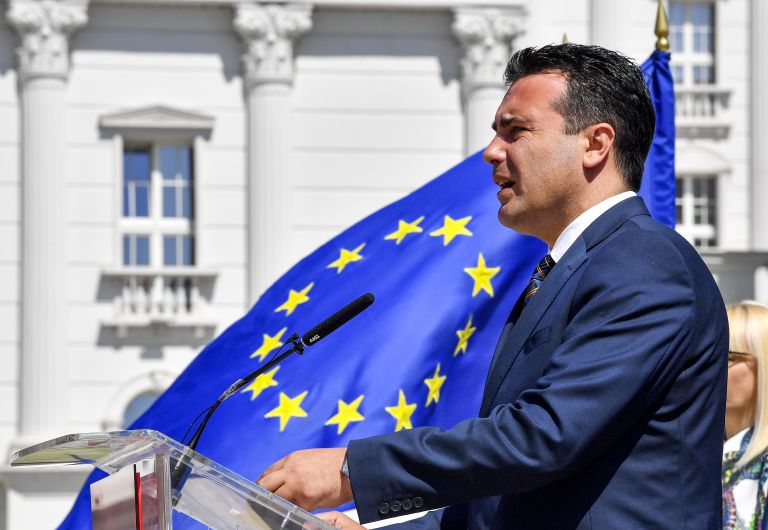 Share
After days of wrangling and delays, FYROM PM Zoran Zaev is expected to tell UN mediator Matthew Nimetz and PM Alexis Tsipras whether he accepts the comprehensive settlement reached by the two countries’ foreign ministers on the FYROM naming issue and related matters.

In a post on Facebook, FYROM’s former foreign minister and main opposition VMRO-DPMNE MP Antonio Milososki went as far as to say that Zaev and PM Alexis Tsipras will be meeting on either 7 or 8 June at the Small Prespa Lake to sign an accord.

The two sides had said they would seal a prospective settlement with a meeting of the two prime ministers at Prespa.

“From diplomatic sources: Thursday or Friday (this week) will happen the meeting tsipras – zaev in Greece’s little prespa and the signing of the contract to shift the name Republic of Macedonia. The Main Co-ordinator of for this event and the signing is bojan maricic, an adviser to the Prime Minister’s office.”

Zaev yesterday said that it was a matter of days before he would call PM Alexis Tsipras, something that was believed to signal that a deal was impending.

The most recent reports suggested that Republic of Severna [Northern] Macedonia is the most likely name.

Reports in Skopje indicated that Zaev was given a 7 June deadline, by which time he will first contact UN mediator Matthew Nimetz and then the Greek side to say whether he accepts the package settlement that was agreed to in principle in New York between Foreign Minister Nikos Kotzias and FYROM Foreign Minister Nikola Dimitrov.

Zaev has been subjected to strong pressures domestically not to sign the agreement, as it may be voted down in a referendum planned for the autumn.

FYROM President Gjorge Ivanov openly opposes the deal, and Dimitrov is also said to be against it, though he negotiated it. Both politicians belong to the nationalist VMRO party.

A comprehensive settlement with FYROM is a prerequisite for Greece to acquiesce to FYROM entering Nato and receiving a date to start EU accession talks.

Sources say that if Zaev approves the deal, it would offer a two-year transitional period to implement the name domestically and revise the constitution to include the new name and remove irredentist references.

Both moves are necessary conditions for Greece to accept any deal.