Eurogroup concludes with agreement on €10.3bn in installments

After an 11-hour meeting in Brussels, the Eurogroup finally concluded and came to a decision regarding the bailout review… 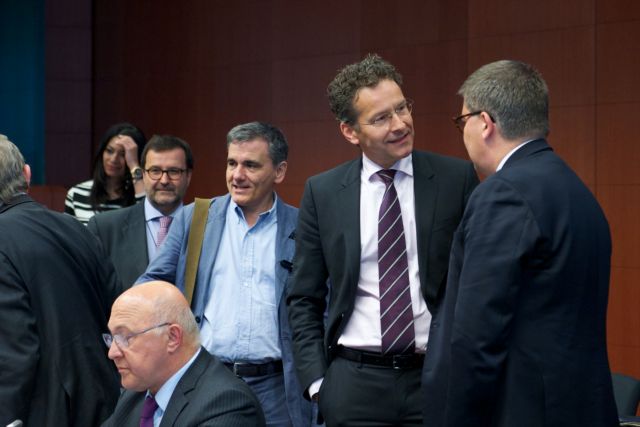 After an 11-hour meeting in Brussels, the Eurogroup finally concluded and came to a decision regarding the bailout review, funding and Greece’s debt.

According to the Eurogroup chairman Jeroen Dijsselbloem, 10.3 billion euros will be paid out to Greece in two installments; one for 7.5 billion euros in June and one after the summer, when a number of prior actions have been implemented.

In relation to Greece’s public debt, the Eurogroup chief stated there was an agreement for a solution in three stages, with short and long-term measures, as well as a long-term mechanism.

Tsakalotos: “This is the beginning of Greece‘s exit from recession”

Following the conclusion of the Eurogroup meeting, the Greek Minister of Finance Euclid Tsakalotos commented that “we hoped for an installment of 9 to 11 billion euros – the final amount is 10.3 billion euros”.

The Greek Finance Minister further explained that “there is ground now to allow us to be optimistic that this is the beginning of the reversal of the foul cycle in which Greece has fallen, with recession and measures, and that the country will enter a virtuous cycle with the return of investors”.

The Eurogroup welcomes that a full staff-level agreement has been reached between Greece and the institutions. Also, the Eurogroup notes with satisfaction that the Greek authorities and the European institutions have reached an agreement on the contingency fiscal mechanism, which is in line with the Eurogroup statement adopted on 9 May in particular as regard the possible adoption of permanent structural measures, including revenue measures, to be agreed with the institutions. It therefore provides further reassurances that Greece will meet the primary surplus targets of the ESM programme (3.5% of GDP in the medium-term), without prejudice to the obligations of Greece under the SGP and the Fiscal Compact.

The Eurogroup also welcomes the adoption by the Greek parliament of most of the agreed prior actions for the first review, notably the adoption of legislation to deliver fiscal parametric measures amounting to 3% of GDP that should allow to meet the fiscal targets in 2018, to open up the market for the sale of loans and to establish the agreed Greek Privatisation and Investment Fund that should operate in full independence. The Eurogroup mandates the EWG to verify in the next few days the full implementation of the outstanding prior actions on the basis of an assessment by the institutions, in particular the corrections to the legislation on the opening up of the market for the sale of loans, and on the pension reform, as well as the completion of all prior actions related to the government pending actions in the field of privatization.