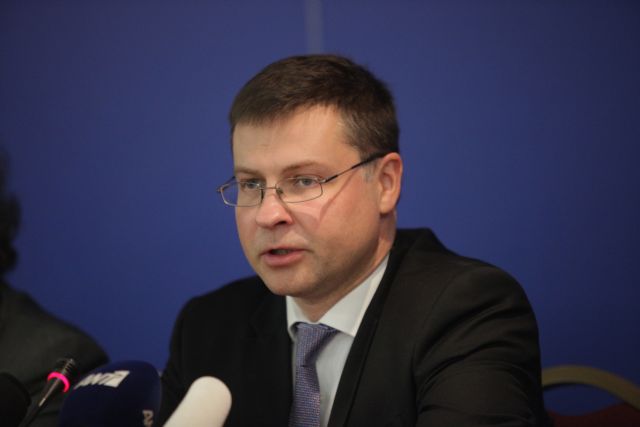 The Vice President of the European Commission Valdis Dombrovskis and the Governor of the Bank of Greece Yannis Stournaras agreed that the recapitalization of Greek banks must conclude by the end of the year, in the press conference that followed their Tuesday-morning meeting.

On Monday Mr. Dombrovskis associated the recapitalization with wrapping up with bailout program review, hinted that otherwise a ‘bail in’ may occur. The review must conclude by the 15th of November, he explained, otherwise Greek deposits may face a haircut in 2016.

This reflects the position of Germany, which wants to use the threat of a bail in as a means to pressure Greece into completing the review. On the contrary, the European Central Bank wants to disassociate the recapitalization from the review, so that the bank procedures begin by mid November. One scenario suggests that the Eurogroup may greenlight the recapitalization, provided there has been sufficient progress.

Meanwhile, an agreement between the European Commission and the Greek government was publicized on Monday, regarding technical assistance for the support of reforms in Greece. Specifically, the Commission will provide assistance in tackling tax evasion and corruption, updating the welfare system and creating a friendlier environment for business.

90% of prior actions implemented

The government council of financial policy convened on Tuesday and issued a statement expressing its satisfaction with the degree of implementing prior actions that were agreed for the mid-to-end of October.

According to the council’s statement, about 90% of actions have been implemented. A number of issues have not yet been address (such as the VAT in education and the primary residence auctions) due to their complexity and disagreement – of a political nature – with the institutions.