The Prime Minister Alexis Tsipras stressed that the current European policy on migration is “in the wrong direction”, in his meeting… 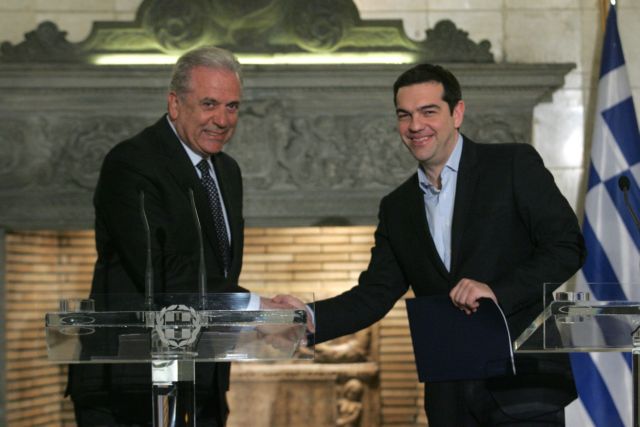 The Prime Minister Alexis Tsipras stressed that the current European policy on migration is “in the wrong direction”, in his meeting with European Commissioner for Migration, Home Affairs and Citizenship Dimitris Avramopoulos on Tuesday. According to the PM, the end result is Greece turning into a “warehouse of human souls”.

In the press conference that followed their Tuesday-morning meeting, Mr. Tsipras argued that the European Union must demonstrate its solidarity not only to the people escaping areas of conflict, but also towards frontier countries that are receiving the waves of migration and need additional support to cope with the influx.

The European Commissioner warned Mr. Tsipras that the climate in Brussels for Greece for Greece, due to the significant delays attributed to Athens in the current negotiations. He also stressed that the migration policy issue should not be associated with the ongoing negotiations and maintained that he cannot imagine Greece being expelled from the Eurozone.

The Monday-afternoon meeting arranged between Prime Minister Alexis Tsipras and European Commissioner Dimitris Avramopoulos was postponed for 10am on Tuesday, due to the plenary session of the parliamentary committee on the bailout. The meeting was called by the Prime Minister in order to discuss Greece’s relationship with the European Union and how Mr. Avramopoulos may contribute towards an improvement.