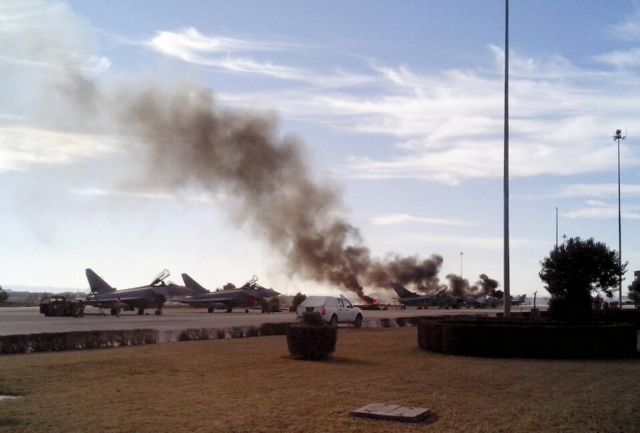 Ten people were killed and a further 19 were injured when a Greek F-16 fighter jet crashed during take off from the airport of Los Llanos, Albacete in southeastern Spain, during a NATO exercise.

Amongst the dead are the two Greek pilots – Captain Panagiotis Laskaris, aged 35 and Captain Athanasios Ziagas, aged 31 – and eight French military officers, according to the official statement of the Greek Spanish authorities. The Greek Ministry of National Defense has declared three days of mourning in the Armed Forces for the deaths of the two experienced pilots.

The Spanish Defense Ministry announced that the fighter jet fell after suddenly loosing power and crashed into other planes on the ground, causing further damages. NATO Secretary General Jens Stoltenberg commented that he was “deeply saddened” by the F-16 crash.

Prime Minister Alexis Tsipras contacted the Chief of the Air Force to be informed on the tragic accident and asked to be updated on any developments. The outgoing Minister of National Defense Nikos Dendias expressed his sorrow and pledged his support to the families of those affected.

The F-16 belonged to the 341st Squadron of the 111th Combat Wing based in Nea Anchialos and was in Spain to participate in NATO’s 2015 Tactical Leadership Program, which aims to improve multinational coordination in aerial operations. The chief of the Tactical Air Force Command Christos Vaitsis has headed for Spain.