Violent clashes break out in Athens on Grigoropoulos anniversary 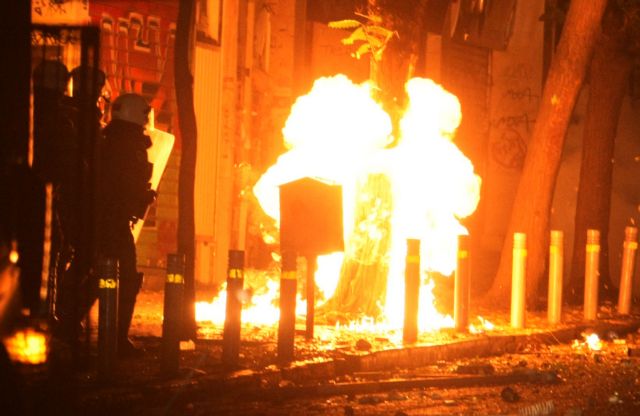 The sixth anniversary of the murder of 15-year-old Alexis Grigoropoulos by police officer Epaminondas Korkoneas sparked major clashes between riot police and protesters in down town Athens. The police detained 296 people, of whom 43 were ultimately arrested, while 12 police officers were injured.

The clashes began around 7pm and carried on until the early hours on Sunday. A group of about 8,000 attended gatherings called by anarchist and far-left groups. Most of the clashes took place in the areas around the squares of Omonia and Exarchia and the Athens Polytechnic. Police deployed water cannons in an effort to disperse crowds of protesters, who responded by hurling stones and molotov cocktails.

Police also clashed with protesters in other major cities in Greece, such as Thessaloniki, Patra, Volos and Agrinio.

Footage from the violent clashes made the headlines worldwide, with many media outlets highlighting instances of police brutality. Reuters captured a scene of a riot police officer punching a handcuffed protester, while another kicks him.

Following the publication of the Reuters video, the police announced that it has launched an internal investigation to determine what happened.