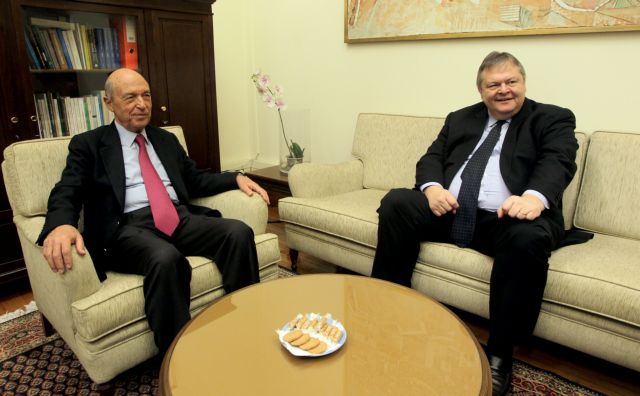 The President of PASOK Evangelos Venizelos met with his predecessors and former Prime Ministers Giorgos Papandreou and Kostas Simitis.

On Friday morning Mr. Venizelos spoke with Kostas Simitis about the recent financial developments and the foundation of the Democratic Faction. Mr. Venizelos stated that they had a “meaningful and in-depth” discussion on the troika negotiations and international affairs, such as the Cypriot Dispute and relations with Turkey.

Mr. Simitis also issued a statement noting that the two agreed that the Democratic Faction “is an important step”. Mr. Simitis also stressed the need to maintain the effort to cooperate with “all movements and people who could contribute towards the creation of the necessary strong pole for political stability and the country’s future”.

The government Vice President also met with Giorgos Papandreou on Thursday, in an effort to improve their troubled relationship. While Mr. Papandreou had previously expressed his disagreement with the creation of the Olive Tree initiative, he appeared more open to discussing the Democratic Faction.

Mr. Venizelos commented that there was a “friendly climate” in the discussion on Thursday and is expecting a series of proposals from Mr. Papandreou in relation to the Democratic Faction.