Preparations for trilateral summit between Greece, Cyprus and Israel

Over the next few weeks the, the Foreign Affairs Ministers of Israel and Cyprus, Avigdor Lieberman and Yannis Kasoulidis, are… 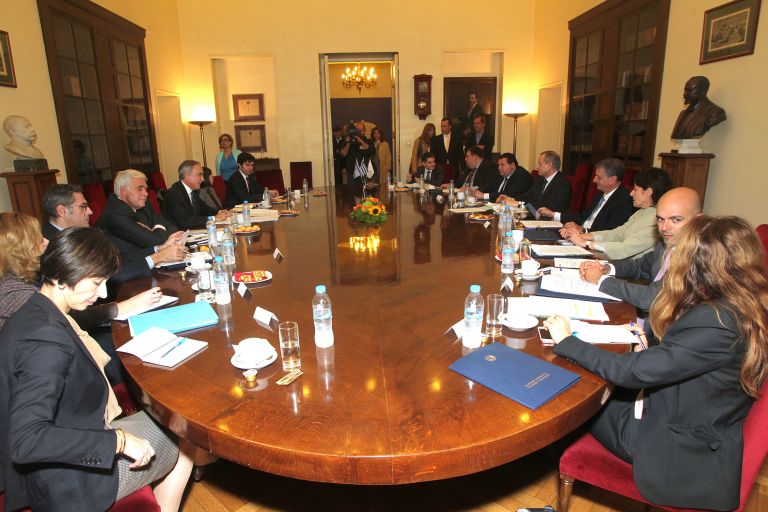 Over the next few weeks the, the Foreign Affairs Ministers of Israel and Cyprus, Avigdor Lieberman and Yannis Kasoulidis, are expected in Athens in order to begin discussions for a trilateral summit between the three. The plans for such an agreement came after preliminary discussions in Athens on Wednesday between the Foreign Affairs Ministry general secretaries of the three countries, ambassadors Anastasios Mitsialis, Alexandros Zenon and Nissim Ben Shitrit.

The three general secretaries met with the Foreign Affairs Minister Evangelos Venizelos, who made the announcements. The trilateral summit intends to work towards “regional peace, stability, security and prosperity”, as well as the development of greater financial cooperation, with an emphasis in the energy sector.

Diplomatic sources noted that this cooperation will not be directed against a third party, such as Turkey. However, despite the efforts to deescalate the tension between Athens and Ankara, such as the upcoming 3rd Supreme Council of Cooperation scheduled for the 5th and 6th of December, Turkey continues to carry out provocations.

According to the Ministry of National Defense, two Turkish F16 fighter jets intercepted an aircraft of the Civil Aviation Authority (YPA) that was flying near Psara, believing it to be a flying radar. The interception took place in Greek airspace and one of the two fighter jets carried on the pursuit until Myconos. An alarm was raised and the Greek Air Force dispatched fighter jets to intercept the Turkish F-16s.

The chief of the Hellenic Tactical Air Force Air Marshal Christos Vaitsis demanded explanations from his Turkish counterpart, who responded that the interception was a mistake and that he would carry out the necessary disciplinary procedures.