Maziotis: “The Revolutionary Struggle does not apologize” 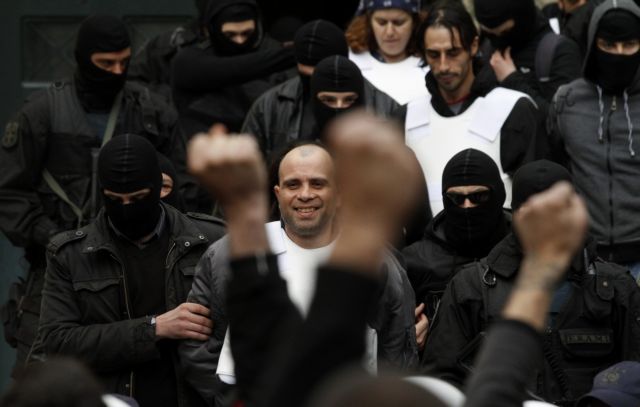 The police completed their investigation of an apartment in Marousi where Nikos Maziotis lived with his fugitive partner Paula Roupa and their four-year-old son for the past couple years under assumed names and are now widening their investigation in other areas in Athens.

Based on reports from neighbors in the area, as soon as the news broke out of Maziotis’ arrest in Monastiraki last week, Roupa promptly left the apartment with her son. Neighbors commented that the couple was quiet and mostly kept to itself.

Under the assumed name of Michalis Michelakis Maziotis had purchased a car which the police believe must be stored in underground parking space along with weapons. The ballistics examination of the USP pistol recovered from Maziotis showed that it had not been used in any previous crimes.

After undergoing surgery for a gunshot wound, which he suffered during his arrest, at the «Evangelismos» hospital, Maziotis repeatedly requested to be transferred to the medical facilities of the Korydallos prison.

While at the hospital, Maziotis was visited by the investigating judge for a deposition and was given time until Monday. Maziotis has refused to cooperate with authorities and did even not confirm his name when questioned. When asked about his profession, the imprisoned anarchist replied «rebel«.

On Monday Maziotis was visited again by investigating authorities at the special holding center in the medical facilities of the Korydallos prison. Maziotis was defiant and told the examiner that “the members of the Revolutionary Struggle do not apologize”.

The police have issued a warrant for the arrest of 35-year-old Giorgos Petrakakos, who is officially considered Maziotis’ accomplice in his recent activities. Petrakakos was previously known as an accomplice of the still-at-large Vasilis Paleokostas, who is believed to have established ties between urban guerilla groups and crime syndicates in Greece.

Early on Sunday morning a group of anarchists attacked the riot police unit stationed outside the PASOK offices in down town Athens with Molotov cocktails. The group later announced online that the attack was in response to Maziotis’ arrest. No injuries or arrests have been reported