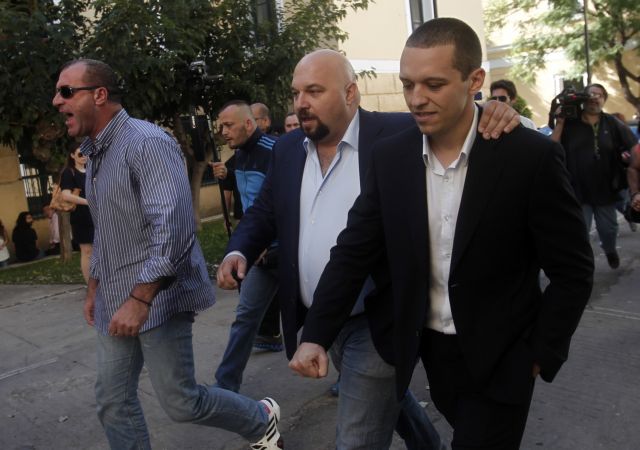 After a marathon session three of the four Golden Dawn MPs – Kasidiaris, Panagiotaros and Michos – were set free on bail, while the fourth – Nikos Lagos – will remained in custody. The three MPs departed immediately, pushing journalists out of their way off and yelling slogans.

The first Golden Dawn MP to plead was Ilias Kasidiaris, who argued for about seven hours that he was being politically persecuted due to his intention to run for Mayor of Athens and that his name was not referred to in any conversations and that there was no evidence against him.

When asked about the party finances, he responded that they never received funding from any business owners. He denounced the evidence of the two protected witnesses and asserted that one of them is a former ANEL member who had been expelled from Golden Dawn was paid by television station ALPHA to give a falsified interview. The Golden Dawn MP claimed that the “assault squads” did not exist and that he did not have such a role.

Ilias Panagiotaros’ finished plead after about fours, following a similar strategy to Kasidiaris. Panagiotaros claimed all charges were politically motivated and unsubstantiated, while disputing the witnesses. The MP shouted that “we are as clean as crystals”, arguing that the events implicating him in criminal activities are “random”.

The third MP to plead was Yannis Lagos, who maintained that the phone calls he made were to find out about what had happened after Fyssas was murdered. As with the previous pleas, Lagos spoke of a political persecution and that he is not involved in the criminal activities attributed to him and the party.

The fourth MP Nikos Michos completed his plea just before 9.30am, following the same strategy of denial and political persecution as the other Golden Dawn MPs. The interrogating judges and prosecutors will now deliberate as to whether they will be held in custody until their trial or not. Party leader Nikos Michaloliakos is scheduled to plead today, followed by his second-in-command Christos Pappas on Thursday.

“Regional” Golden Dawn members Dimos Fragakis and Stavros Santorineos were released on bail yesterday. The two men claimed that they had no relation, organizational or ideological, with Golden Dawn. The two men were allowed bail on condition that they do not leave the country.

About 100 Golden Dawn supporters responded to a call outside the courts. The ultra nationalists raised banners and Greek flags, yelled xenophobic chants and claimed that they were being persecuted for their political ideology. Golden Dawn MPs Barbarousis, Kouzilos, Koukoutsis and Iliopoulos attended the rally. Mr. Michaloliakos’ wife MP Eleni Zaroulia was caught assaulting a camera man with her handbag outside the Police HQ.