Kyriakos Mitsotakis said he had a clear mandate for change, pledging more investments and fewer taxes. 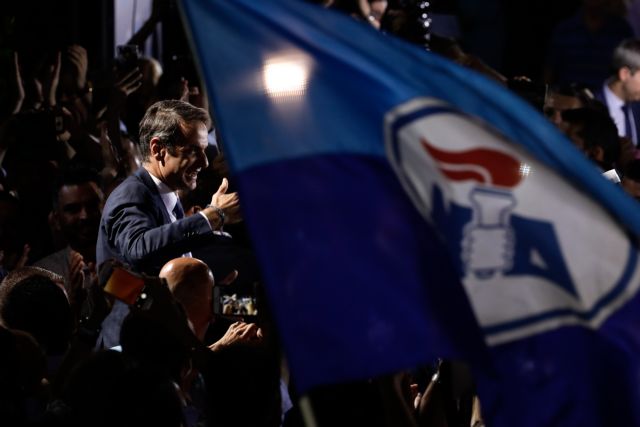 Greece’s opposition conservatives returned to power with a landslide victory in snap elections on Sunday, and Prime Minister elect Kyriakos Mitsotakis said he had a clear mandate for change, pledging more investments and fewer taxes.
The win appeared driven by fatigue with years of European Union-enforced belt-tightening, combined with high unemployment, after the country almost crashed out of the euro zone at the height of its financial travails in 2015.

Exit polls showed New Democracy winning between 155 and 167 seats in the 300 member parliament, taking advantage of an electoral system which gives bonus seats to the front-runner.
Mitsotakis said in a televised address that the election outcome gave him a strong and clear mandate to change Greece.
“I am committed to fewer taxes, many investments, for good and new jobs, and growth which will bring better salaries and higher pensions in an efficient state,” Mitsotakis said.

Tsipras said he respected the will of the Greek people.

“Today, with our head held high we accept the people’s verdict. To bring Greece to where it is today we had to take difficult decisions (with) a heavy political cost,” he told journalists.

Tsipras took over from the conservatives in 2015 as Greece was at the peak of a financial crisis which had ravaged the country since 2010. Initially vowing to resist deeper austerity, he was forced into signing up to another bailout months after his election, a decision which went down badly with voters.

The handover will take place on Monday, after Mitsotakis’s swearing in as new Prime Minister.
Sunday’s poll was the first national election since the country shook off close scrutiny by its European partners who loaned Greece billions in three bailouts.

Tsipras signed up to the latest, in 2015, in return for debt relief.

Mitsotakis, 51, assumed the helm of New Democracy in 2016. Although he is regarded as a liberal, his party also harbors members with more right-wing views.

Golden Dawn, an extreme right-wing party detractors accuse of having neo-Nazi sympathies, lost significant ground and did not reach the 3 percent threshold to parliament.