“Mr. Tsipras lies seven days a week,” Mitsotakis said after the vitriolic response of the PM’s office to his comment on flexible labour relations. 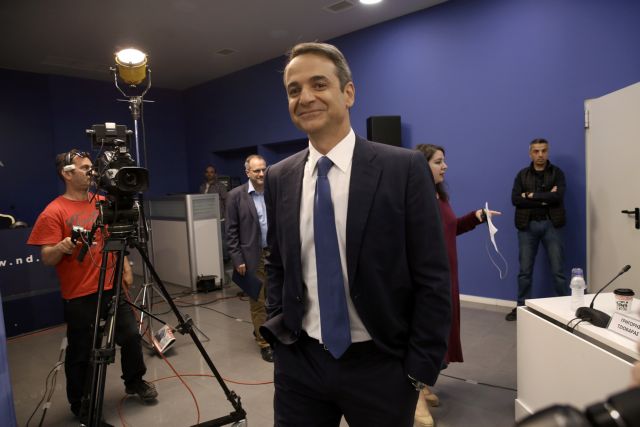 Conservative New Democracy leader Kyriakos Mitsotakis has excoriated Prime Minister Alexis Tsipras regarding both the annual bonus of half a month’s pension that will for the first time be distributed to pensioners before the 26 May European Parliament election and regarding the government’s interpretation of his reference to “seven-day work”.

“Mr. Tsipras lies seven days a week,” the main opposition leader declared, regarding the vitriolic response of the PM’s office regarding his comment on flexible labour relations.

Mitsotakis blasted “SYRIZA’s miserable talk of seven-day work” and maintained that he was referring to the Papastratos tobacco company, where employees work five days and 37 hours per week with better pay. The business-wide contract was the result of arbitration and was approved by the labour minister.

“Mr. Tsipras is such a desperate liar that he is denouncing a contract that his government approved at a business that he has visited…Citizens who by now know Mr. Tsipras and want to exit the vicious circle of misery will in a few days give him the response thayt he deserves,” Mitsotakis said.

The opposition leader’s references to the work week immediately stirred a political maelstrom.

“When an enterprise agrees with employees through a company-level collective contract to go from a five-day to a seven-day work week with the consent of employees and with much better pay and enhanced rights and they agree on that, then we are doing nothing more than recognising that we are in a changing world and that employees and businesses and the state should adjust to this new reality,” Mitsotakis told reporters on 12 May.

SYRIZA spokesperson Rania Svigou after Mitsotakis news conference said that, “Going beyond his hair-raising position on the outdated eight-hour work day, he committed himself to pushing employees back into the 18th century.”

Svigou also denounced Mitsotakis’ description of the government’s annual pension bonus as “an unabashed electoral handout” and said that he categorically refused to guarantee the continuation of that permanent measure.

Mitsotakis also blasted the government’s announced pension bonus. “Even as he [Tsipras] is cutting existing pensions by lowering the tax-free threshold, he is depicting a pre-election handout as a 13th pension check,” Mitsotakis underlined.

Svigou charged that Mitsotakis again “scorned social benefits which are the constituent elements of the social state in all European countries, describing them as a recyclinf of poverty”.