Tsipras declares MPs will not be terrorised, will ratify Prespa Accord 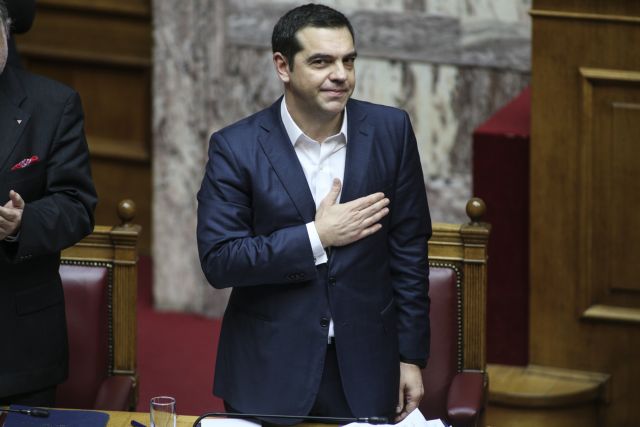 With many MPs who will vote to ratify the Greece-FYROM Prespa Agreement having received even death threats, Prime Minister Alexis Tsipras passionately defended the accord and accused main opposition New Democracy of hypocrisy.

Tsipras said this is an hour of national self-confidence and pride and that history will vindicate Greece, the heavy historical weight of which does not allow it to be an extra on the stage. Greece will move forward with the [ratification] vote of MPs, he said.

“How shall we call these people [FYROM citizens]? Either I misread Lenin when I was young or young or you are not doing something right. The self-determination of nations was always a basic element of communist thought,” Tsipras said addressing the General Secretary of the Greek Communist Party (KKE) which will vote down the accord, mainly because it opposes FYROM’s Nato membership.

Addressing centre-left Movement for Change [with Pasok at the core] leader Fofi Gennimata, the PM underlined that when Pasok PM Costas Simitis was in power the Ohrid Agreement [that put an end to a budding ethnic Albanian and Slavomacedonian civil war] states that the official language of Macedonia is Macedonian. “You did not veto that and you did not raise objections.”

“An international agreement cannot recognise ethnicity but only nationality. States recognise states,” Tsipras declared. “I think we exhausted discussion of the ethnicity issue with the clarifications [offered in a diplomatic note verbale] from our neighbour.”

Tsipras cited the late conservative former foreign minister and New Democracy leader Evangelos Averof who, the PM said, recognised that Macedonian is not spoken in Greek Macedonia, hence he recognised the existence of another Macedonia with a distinct language.

“You accuse us of ceding [the status of] a people. Mr. Mitsotakis, you cannot cede something that you do not have. We did not have a Macedonian language. Alexander the Great spoke the Greek language, which he was taught by Aristotle,” Tsipras said.

“The voting down of this agreement by the parties that governed since ’91 [Pasok and New Democracy] and thereafter is political hypocrisy with a capital ‘H’. This agreement guarantees Greek tradition and the historical legacy of ancient Macedonia in the clearest manner. I believe that our soul is our history. And we are taking it back. No one can expropriate it from now on,” the PM concluded.