Tsipras: “We will not give in to the brutal populism of fences and deportations” 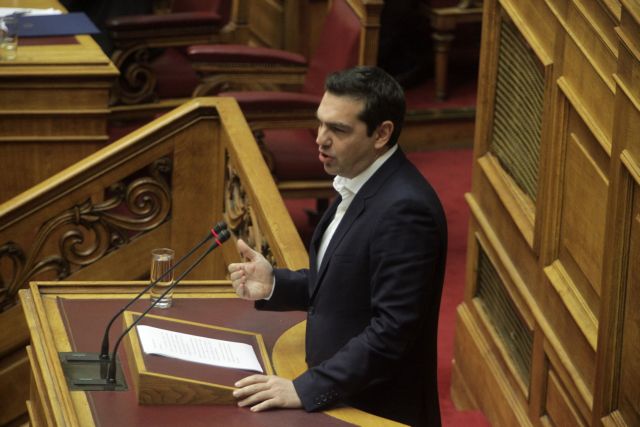 The Prime Minister Alexis Tsipras appeared in Parliament on Friday morning to respond the questions posed by the leader of the Union of Centrists Vasilis Leventis and New Democracy MP Dora Bakoyanni.

Mr. Leventis questioned the Prime Minister on the legality of the hotspots being established in Greece and the government’s overall strategy in dealing with the refugee crisis. The Prime Minister defended his government choices, arguing that they were dictated by reality itself and geography.

Mr. Tsipras argued that Greece will “not give in to the brutal populism of violence, fences and illegal deportations” underlining that his government will insist upon a “policy of humanism and solidarity, despite how difficult it is in our times”. The Prime Minister noted that the establishment of hotspots on the islands where refugees arrive is necessary and called anyone opposing them to submit alternatives.

Furthermore, the Prime Minister refuted media reports suggesting that Greece may be excluded from the Schengen Area and underlined that “the threats bear no relation to reality” stem from extremist circles in Europe.

In response to the question posed by MP Dora Bakoyanni, the Prime Minister rejected the accusation that the need for the bank recapitalization stemmed from the “hard negotiation efforts of the government” and the capital controls which were introduced earlier in the summer. He accused the main opposition party of adopting a «subversive and populist» stance on the issue.

The Prime Minister in turn claimed that this government successfully carried out the recapitalization and protected state interests, while lashing out against New Democracy, which he accused of «plundering the country for 25 years«. Mr. Tsipras opined that his government protected the public interest and averted the possibility of a deposit haircut.