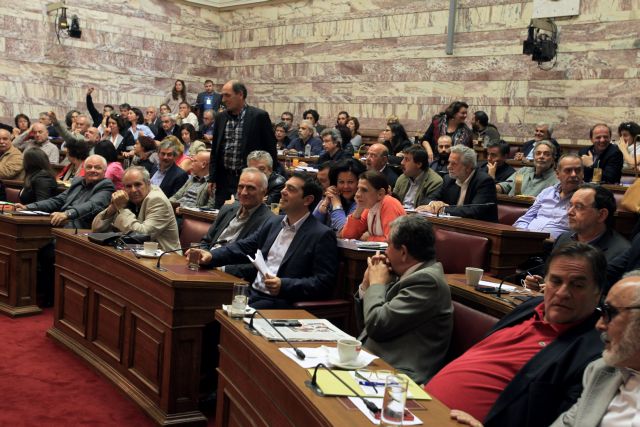 The government Vice President Yannis Dragasakis was faced with the fierce reactions and criticism from SYRIZA officers and MPs alike on Thursday afternoon, when he attended the meeting between SYRIZA’s political secretariat and the parliamentary group’s presidency.

Mr. Dragasakis attended the meeting the provide updates on the development of the negotiations with the creditors. The President of Parliament Zoi Konstantopoulou was reportedly amongst the more staunch critics and accused the government of being unreliable and abandoning the pledges it made in Thessaloniki.

Many more SYRIZA officers, particularly from the party’s ‘internal opposition’, the Left Wave, expressed their frustration and opposition to the government’s tactics in the negotiations, including officers who until recently were known for their loyalty to the party leadership, such as Rudi Rinaldi.

Reportedly, the Vice President of Parliament Alexis Mitropoulos criticized the government’s decision to accept part of the 20 February agreement and everything it entails. According to the same sources, Mr. Dragasakis is said to have informed the party’s secretariat that the government was prepared to make a deal with its partners by the 19th of May, however he was forced to leave the meeting, which carried on without him.

After the meeting concluded, the political secretariat issued a statement, arguing that “the persistence of the creditors to implement the bailout program of the Samaras government, by creating a stranglehold of political pressure and financial suffocation in the country, directly conflicts with the concept of democracy and popular rule in Europe” and stresses that “these demands cannot be accepted”, while calling for an end to “the criminal policies of the bailouts”.