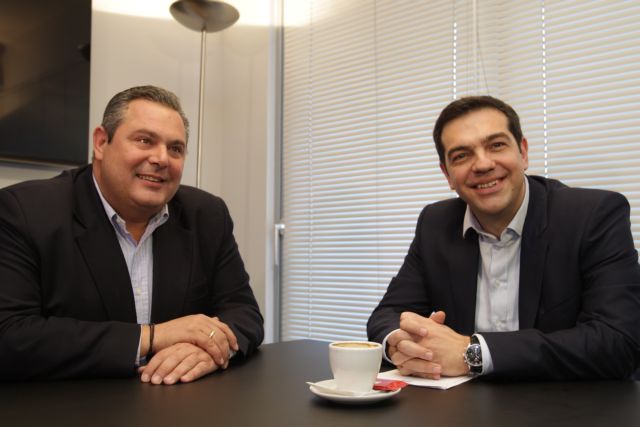 The leaders the Independent Greeks Panos Kammenos with SYRIZA president Alexis Tsipras on Monday morning and came to an agreement for the formation of a coalition government.

On his way out of Mr. Tsipras’ office at SYRIZA’s central HQ, Mr. Kammenos told journalists that “from this moment on there is a government in the country. The Independent Greeks give a vote of confidence. The Prime Minister will go the President of the Republic and announce the government formation”.

Mr. Kammenos refused to get into any further details regarding the number of Ministers his party will appoint, explaining that it is customary for the Prime Minister to make the announcement. He also added that “the goal if for the united Greeks to move on to a new day”. While there are no details regarding their cooperation, Mr. Kammenos’ party is likely to take over Shipping matters.

Mr. Tsipras is also scheduled to meet with the leader of The River Stavros Theodorakis on Monday afternoon, in order to discuss the possibility of the newly-formed party to support the coalition government efforts. Mr. Tsipras is also rumored to ask to meet with the Communist Party’s general secretary Dimitris Koutsoumpas, who announced that his party would support any pro-people measures that SYRIZA proposes.