The Prime Minister Antonis Samaras and the government Vice President Evangelos Venizelos have arranged to meet at 12:30 on… 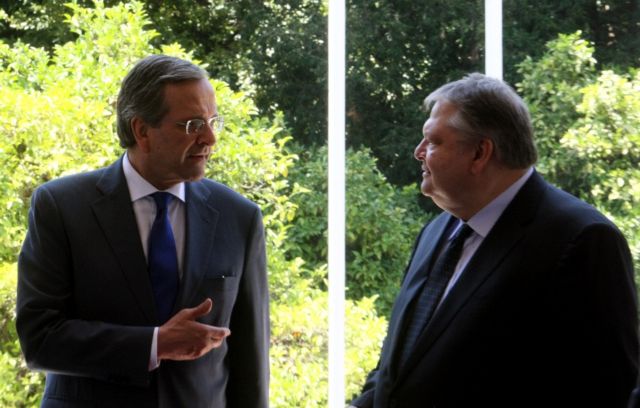 The Prime Minister Antonis Samaras and the government Vice President Evangelos Venizelos have arranged to meet at 12:30 on Wednesday, in order to discuss preparations for the upcoming Eurogroup on Thursday, among other matters. With the troika expected to return to Athens at some point in November, the coalition government want to focus on completing the current round of negotiations, in an effort to finally exit the bailout supervision.

The Eurogroup scheduled for the 8th of December though is critical, since it will follow the troika’s review and the coalition government expects the final EU and IMF loan installment payments, along with a confirmation of the Greek debt’s sustainability. Should this be the case, the coalition will be able to negotiate and extension of loan repayments in conjunction with an interest rate cut.

With SYRIZA consistently ahead in the polls though, Samaras and Venizelos want to avoid any controversial reforms that may provoke the ire of taxpayers. As such, the coalition government is only will willing to discuss minor reforms and wants to avoid addressing the insurance system and collective redundancies.

At present there are significant possibilities of early elections being called, in relation to the Presidential election that is scheduled to take place by early 2015. With the coalition seemingly unable to amass the necessary 180 MP votes, the coalition government wants to avoid further exacerbating the climate with unpopular actions.

Should everything go along as planned, the coalition government expects to have left the bailout deal behind in January, while creating a precautionary credit line and come to an agreement regarding the public debt.