One step before the troika deal – the key points

The current round of negotiations with the troika appears to be the hardest so far for the Samaras government, however Ministry of Finances Yannis Stournaras… 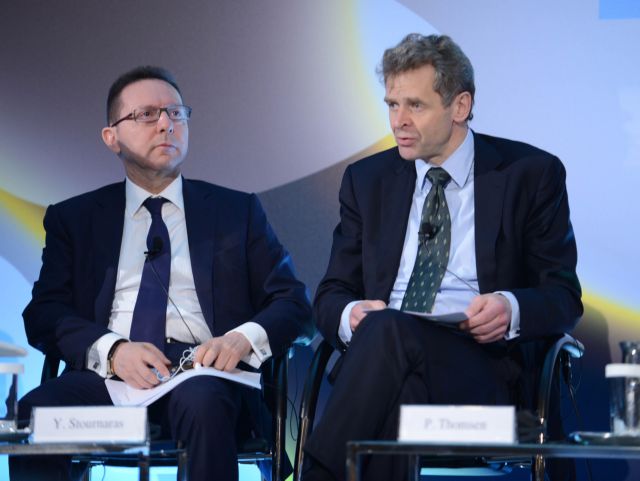 The current round of negotiations with the troika appears to be the hardest so far for the Samaras government, however Ministry of Finances Yannis Stournaras, who is headed to Brussels on Tuesday, commented that “we are on the right path. I believe that […] by Monday night negotiations will be complete”.

The troika is expected to issue a statement regarding the negotiations, bit even if one or two issues remain unresolved, they will be outlined in order avoid causing any further implications in the review process of the Greek economy. Some rumors go as far to suggest that the Greek and German Minister of Finances Stournaras and Schäuble have agreed that “now is the time for structural changes in Greece”.

In relation to fiscal measures, it was decided to split the 2013 primary surplus, with two thirds going towards supporting the insurance funds, with the other third going towards the 2014 budget, acting as a “safety net”, despite the government’s insistence on distributing part of it for social purposes. That way, the government will be able to cover any expenses from court rulings regarding special pay rolls (such as uniformed officers).

Unconfirmed rumors have suggested that the 2013 primary surplus approached 3 billion euros, without including the returns of interest or profits from bonds. The surplus was possible thanks to further expenses cuts worth 1.2 billion euros (of which 600 million came from wage and pension cuts), 1 billion from increasing tax revenue and other non-recurring revenues (such as the property tax), while the rest came from community Funds, thanks to the efforts of Mr. Reichenbach and Growth Minister Kostis Hatzidakis.

The troika has also asked for the implementation of the minimum revenue measure in impoverished areas, such as Perama. For Thessaloniki the government has to choose between the areas of Kordelio or Menemeni. About 50 million euros will be invested in this program.

As for matter related to insurance, the government will have to maintain its viability and take all necessary measures, should there be any deviations from the goals. Deviations currently exist in the social balance goals).

Changes will be implemented in collective redundancies in the private sector so that the Minister’s approval is not necessary, while no limitations will apply to recovering sectors of the economy.

Despite the insistence of Poul Thomsen (IMF) to establish a number of public sector dismissals for 2014, the matter will be reviewed in October 2014, thanks to the intervention of the EU’s Matthias Mors. This will give the Minister of Administrative Reform Kyriakos Mitsotakis the time to carry out dismissals planned for 2014. This includes the suspension of 3,000 from local government or other alternative “reserves”.

Mr. Mitsotakis and the Deputy Minister of Finance Staikouras have committed to carry out all wage and salary payments of private legal entities, especially public enterprises, via the single payment authority in order to inspect the payments.

The latest information suggests that a compromise has been reached, so that sale of milk products with different shelf life is allowed. The government was unable to support its demands for the continued regulation of pharmacy operation and the special provision providing the inheritance of the business by children.

Finally, an agreement was reached on the recapitalization for the banks. The relevant bill will be submitted in Parliament this week, paving the way for the capital increase of Eurobank with private funds.