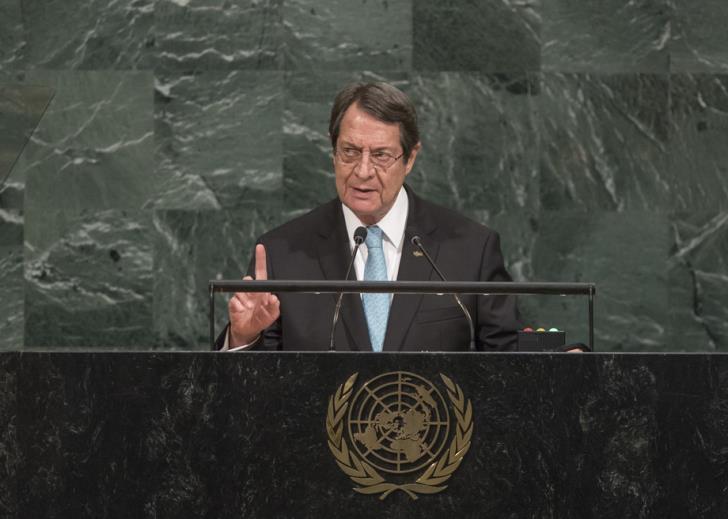 Anastasiades stressed the Greek Cypriots’ want to share the wealth from gas deposits with the Turkish Cypriots and if Ankara recognises the sovereign rights of the Republic of Cyprus, Nicosia would disburse funds to the Turkish Cypriot side even before a final settlement.

In his address to the UN General Assembly to Cyprus’ President Nicos Anastasiades launched a scathing attack on Turkey on everything from its stance toward Greece and Cyprus in the Mediterranean to its posture on Cyprus talks, to its stance on Cyprus’ gas deposits and its destabilising role in the Syria and Libya.

While Turkish President Recep Tayyip Erdogan and Turkish Cypriot leader Ersin Tatar insist on the establishment of two states on the island, which violates the UN framework (a bi-zonal, bi-communal federation on which the two parties have agreed for decades), Anastasiades proposed that talks resume where they left off at the failed 2017 negotiations at Crans-Montana, Switzerland, building on convergences that were achieved there.

Anastasiades said negotiations should focus on the six elements of a solution enumerated by UN Secretary General Antonio Guterres at Crans-Montana.

Turkey’s insists on perpetuation of Treaty of Guarantee

“During the Conference, the Secretary General identified a framework of six elements that should be discussed interdependently and comprehensively, including the Chapter of Security and Guarantees, in order to reach a strategic agreement that would pave the way forward for a comprehensive settlement. Unfortunately, despite our positive engagement and the submission of credible and realistic written proposals, the negotiations were unsuccessful due to Turkey’s inflexible stance and insistence on maintaining the anachronistic Treaty of Guarantee and the right of intervention, as well as a permanent presence of troops. Progress in the Chapter of Security and Guarantees is an essential element in reaching an overall agreement and in building trust between the two communities in relation to their future security,” the Cypriot president said.

“Ever since, and despite our disappointment, we have repeatedly conveyed our commitment to immediately resume direct talks for a settlement of the Cyprus problem from where they were left off at Crans-Montana. In this regard, I wish to welcome the intention of the UN Secretary – General to personally engage in efforts for the resumption of the negotiating process after the completion of the internal political procedures within the Turkish Cypriot community,” said Anastasiades.

Anastasiades responded to all of Turkey’s charges against the Republic of Cyprus, outlined Ankara’s provocations, and critised Turkey’s intervention in Syria and Libya.

Fair distribution of revenues from hydrocarbons

Anastasiades outlined his view about the distribution of revenues from Cyprus’ hydrocarbons programme if and when a federation results from a prospective settlement.

“Federal Cyprus will continue being a contracting party to the 1982 UN Convention on the Law of the Sea. Any revenues accrued from the exploitation of the State’s natural resources will be allocated to the federal government, and I wish to remind that these convergences were never challenged by Turkey or the Turkish Cypriot side.It is for this exact reason that the issue of hydrocarbons was neither raised during the intense negotiating period between 2011 tο 2017 nor was it part of one of the elements of the framework of the UN Secretary – General, as presented at Crans-Montana,” he said.

Anastasiades stressed the Greek Cypriots’ determination to share the wealth from gas deposits and that an escrow account has been created for that reason. He said if Ankara recognises the sovereign rights of the Republic of Cyprus, Nicosia would disburse funds to the Turkish Cypriot side even before a final settlement.

“At the same time, Turkey also disregards the fact that the Republic of Cyprus has established a National Sovereign Fund which safeguards the interests of Greek and Turkish Cypriots from any revenues accrued from the exploitation of hydrocarbon deposits. Moreover, Turkey fails to acknowledge my proposal for establishing an escrow account for the benefit of the Turkish Cypriot community, to which any revenues from the exploitation of hydrocarbons would be deposited, based on the population proportion of the constituent states. And if Turkey will recognize the sovereign rights of the Republic of Cyprus within its Exclusive Economic Zone, then the said revenues might be released for the benefit of the Turkish Cypriot community, even prior to the solution of the Cyprus Problem,” he said.