Xeni Dimitriou: Works and days of a willing prosecutor

The Office of the Supreme Court Prosecutor is a post with great independence and power, but unfortunately Xeni Dimitriou offered it up as a trophy to the executive branch of government. 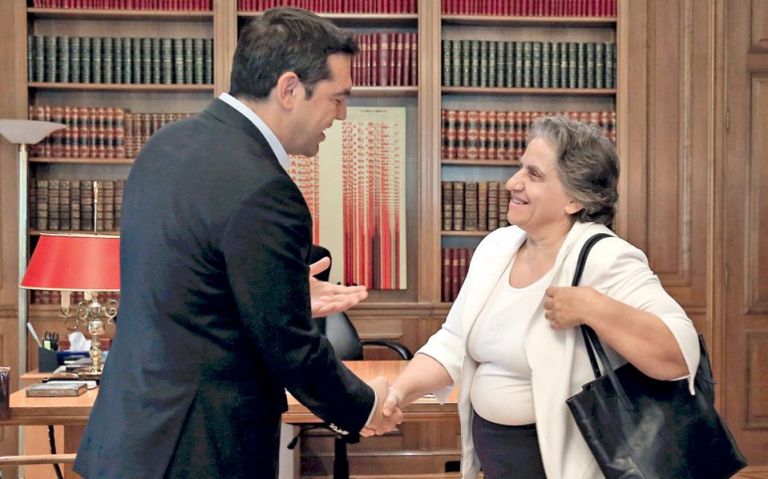 There are certain posts in public service that operate almost anonymously for the majority of the population because the institution transcends the individual that serves it.

Such was the case with the Supreme Court Prosecutor’s Office.

The SYRIZA-Independent Greeks coalition government, however, denied its constitutionally mandated independence and transformed into an arm of the executive branch.

In order to undertake this “mission”, it became the core of a para-judiciary network that did not endure the weight of the responsibilities described in the penal code and “broke” in the Novartis case.

Everything that occurred during the tenure of Supreme Court Prosecutor Xeni Dimitriou, which ended on 30 June, is the story of lost opportunities for her but fortunately not for the judiciary, which resisted attempts to degrade it and thus protected democracy.

Using the judiciary as a means

The manner in which Ms Dimitriou was promoted to the post of Supreme Court Prosecutor revealed that it was not a neutral decision.

When the SYRIZA-Independent Greeks government came to power it already began by February, 2015, with one month in office, to reveal its intention of using the judiciary as a political tool.

Orders were issued to re-open cases that would harm the previous government and judges and prosecutors who did not fall in line were automatically marginalised.

Efterpi Koutzamani served as Supreme Court Prosecutor until she reached the age limit in June, 2016, and had to retire.

For one year, Justice Minister Nikos Paraskevopoulos and Alternate Justice Minister Dimitris Papangelopoulos kept Koutzamani “frozen” and did not even send her documents, which instead were sent to the Lower Court Prosecutor’s Office.

She was not even informed of a meeting between Financial Crimes Prosecutors Eleni Touloupaki and Christos Ntzouras and HSBC whistleblower Herve Falciani (whose data is included in the “Lagarde List”) in Paris in March, 2016, even though she should have approved it in advance.

At 3am on 29 June, 2015, the cabinet tapped Vasiliki Thanou to serve as Supreme Court Chief Justice just hours after Parliament approved the government’s proposed referendum on the third bailout programme that was to be held on 5 July.

On 27 August, 2015, Thanou was sworn in as caretaker PM of the government that conducted the 20 September general election.

In July, 2015, Dimitriou appealed the acquittal of former Hellenic Statistical Authority Head Andreas Georgiou who was facing charges of inflating the national deficit in 2009 in order for the country to accept the first bailout memorandum.

It is said that her colleagues had been previously asked to do the same and refused.

One year later, on 9 June, 2016, the cabinet picked Dimitriou as the next Supreme Court Prosecutor. The decision was taken with ministers signing the related document that was circulated among them.

Appeals soon became Dimitriou’s specialisation. Three times she appealed the acquittals of Georgiou by the Athens Appellate Court Council, bringing back felony charges for the crime of false certification (of the deficit).

The case became a judicial thriller as each time the Appellate Court Council acquitted Georgiou of charges that were based on conspiratorial allegations of former ELSTAT members, especially Sophia Georganta, and on reports in the pro-government press, Dimitriou came along and appealed.

Georgiou’s travails continued until February, 2019, when the Appellate Court Council for a third time refused to put the former ELSTAT chief on trial on the grounds that despite the prosecutor’s recommendation evidence of false certification was lacking.

The case drew the klieg lights of international media attention and the press reports were quite embarrassing for Greece.

Eurostat in a document that was part of the court file underlined that the 2009 deficit had been calculated in accordance with EU criteria and had been approved by it.

Right after Vasiliki Thanou in July, 2017, assumed her post as head of the PM’s legal bureau, she paid a visit to Dimitriou.

The fact that the meeting was not announced stirred opposition criticism at a moment when Dimitriou had again appealed the Georgiou acquittal and had put the government, which was clashing with the judiciary, in a tight spot.

Her ties with at least a segment of the government were such that when in December, 2017, the Athens Appellate Court was struck by terrorists and main opposition leader Kyriakos Mitsotakis visited the court and expressed solidarity in chats with top judicial functionaries, Dimitriou did not hide her consternation.  “Her behaviour was borderline rude,” an associate of Mitsotakis said.

During SYRIZA’s term in office, both Dimitriou and her close friend Maria Papaspyrou, the General Inspector of Public Administration, occupied crucial posts.

The third member in that circle of friends was the late mother of ex-government spokesman Dimitris Tzanakopoulos who died at a young age but the familial bonds remained.

When on 5 February, 2018, it was leaked that Tzanakopoulos was at the Supreme Court at the same time as Corruption Prosecutor Eleni Touloupaki and assistant prosecutors Christos Ntzouras and Yannis Manolis regarding the Novartis case, the opposition raised a political maelstrom over the flagrant violation of the separation of powers.

In fact, however, no one was surprised by the ease with which the government spokesman eased his way into the corridors of the top court of the land.

Links between events, especially in the case of the Hellenic Centre for Disease Control and Prevention (KEELPNO), reveal how the system worked.

The Supreme Court Prosecutor would order that investigations be conducted by the General Inspector of Public Administration or by the Corruption Prosecutor’s Office. The report from the preliminary probe would then be leaked to the government-friendly newspaper Documento and then was plastered on Facebook by Alternate Health Minister Pavlos Polakis.

That would raise a temporary brouhaha but the probes never moved forward and Dimitriou never complained about the leaks of information from a confidential judicial process.

Dimitriou was very often not at her office as her colleagues say that she is the prosecutor who made the greatest number of trips abroad during her tenure. She visited Russia, Armenia, China, Cuba, Morocco, and South Africa among other countries to sign MoUs or to attend anniversary celebrations or participate in round tables.

None of her predecessors had taken official trips abroad.

Whenever Dimitriou had to provide cover for the government’s “grey” handling of cases or for the network in the judicial system, however, she was always there.

Deputy Supreme Court Prosecutor Ioannis Angelis was tied into this system and in his reports he revealed the muck behind the Novartis case.

He admitted his close relationship with Dimitriou and asserted that there was a time when he was her “most beloved child” and when they had identical views, which may have led one to believe that he was her “most obedient child”.

Dimitriou in October, 2018, appointed Angelis as supervising coordinator of the work of the Economic Crime Prosecutors and of the Corruption Prosecutors.

Three months later, Angelis resigned and declared he did not intend to go to jail over the Novartis case. He submitted two detailed reports (the first on 7 January, 2019, and the second on 21 February, 2019) regarding the performance of the Corruption Prosecutor’s Office.

Despite the underlying tensions, Dimitriou did not bring Angelis’ reports to the attention of the Supreme Judicial Council of the Supreme Court, which on 12 April, 2019, proceeded to renew Touloupakis’ term. It is not a moral issue but it has penal ramifications. Angelis recently requested that Dimitriou be recused from the probe of his allegations.

In April, 2018, Dimitriou told a Thessaloniki conference entitled “Democracy and Corruption” that corruption in Greece is “vertical and horizontal” and that this accounts for “the worst crisis in the history of the Greek economy”.

The way Ms Dimitriou carried out her duties demonstrates that she has an odd conception of corruption and democracy.

Seven months later she enraged legal circles when she proposed to the justice minister names of colleagues of hers to staff examinations committees in the exams of the National School of Public Administration and Local Government in which her daughter was competing!

Dimitriou was criticised for not recusing herself so that her alternate Athanasios Katsirodis could replace her and in the end her daughter did not pass the exam.

Games with the Mati wildfire probe

In September, 2018, Dimitriou provoked public opinion when she put the brakes on the report of the emergency preliminary investigation of the deadly Mati wildfire.

The then supervisor of the Lower Court Prosecutor’s Office, Elias Zagoraios, had completed the preliminary probe.

Then, Dimitriou suddenly ordered that Zagoraios’ probe be merged with that of the General Inspector of Public Administration, which no one knew when it would be completed as in the case of the Mandra deadly flooding probe it took General Inspector Papaspyrou eight months to submit the report.

At the time the press reported on Zagoraios’ consternation and after the uproar Dimitriou was forced to issue a statement assuring people of her “unwavering will” to complete the investigation immediately. Zagoraios in a statement covered for Dimitriou and said that her actions were misinterpreted.

Still, the relationship between the two judicial functionaries was not restored.

At the beginning of the year the Supreme Judicial Council of the Supreme Court was supposed to propose three prosecutors for the EU’s Public Prosecutor’s Office.

The matter was handled by a committee chaired by Dimitriou, who was accused of framing the job requirements in such a way as to facilitate the selection of Elias Konstantakopoulos.

Zagoraios had also applied but placed fourth with six votes and then appealed the decision to a plenary session of the Supreme Court.

There, Zagoraios was vindicated with 48 votes, compared to only four votes garnered by Konstantakopoulos, who lost four votes in the process.

The vote was conducted twice and the result was interpreted as a stinging defeat for the leadership of the Supreme Court, as both Dimitriou and Chief Justice Vasileios Peppas opposed the selection of Zagoraios.

Koufodinas went on a hunger strike for three weeks and his supporters engaged in vandalism so that his application would be approved.

In that climate, the criminal division of the Supreme Court accepted Dimitriou’s appeal, even though a year earlier she had initiated disciplinary action against prosecutors who approved Koufodinas’ previous furlough request.

The final decision of the Volos judicial council is pending, but the competent prosecutor has recommended that the furlough be denied.

The Office of the Supreme Court Prosecutor is a post with great independence and power, but unfortunately Xeni Dimitriou offered it up as a trophy to the executive branch of government.