The links with the powerful of Europe did not impede him, despite the sermons against him, from continuing to loyally serve populist traditions 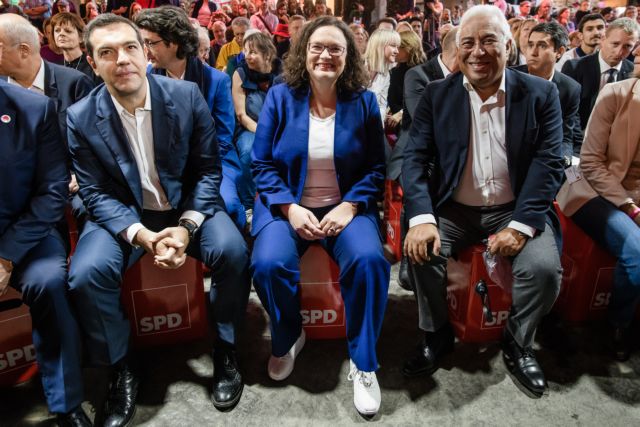 Prime Minister Alexis Tsipras in a speech Germany’s SPD party in Berlin (photo) said that in a clear-minded manner he decided to make a turn and keep Greece in Europe. He said that a Grexit, which some left-wing “revolutionaries” sought, would be a catastrophe for the social forces which his party represents

What he forgot to mention is that up until the previous day, he himself was aligned with the demagogic views that he condemns today.

In other words, he recognises in a meaaly-mouthed manner what was maintained by many – including this newspaper – that bailout memorandums cannot be abolished overnight, nor is a rupture in relations with Europe an option.

Since then, much has transpired, and he became the darling of many in Europe, so much so that he was invited Germany’s SPD (social democratic) party to propose solutions for confronting populism and the problems that bedevil European unification.

The links with the powerful of Europe did not impede him, despite the sermons against him, from continuing to loyally serve populist traditions, with which he came to power and continues to manage it.  The constant targeting of his opponents, the undermining of democratic institutions, and persistent demagoguery remain the leitmotif of his policies.

He presents himself as a responsible interlocutor of European Social Democracy, but in Greece he embraces conspiracy theorists and attempts in every way to vilify centre-left cadres. Abroad, he portrays himself as a politician seeking consensus, and domestically he cultivates polarisation and division in any way he can.

With all the issues he has opened and grappled with, from the constitutional amendment process to Church-State relations, his objective in not to solve real problems, but rather to divide and undermine the opposition.

That two-faced aspect of Mr. Tsipras may be temporarily convenient for the other Europeans, who face dilemmas and their own problems, but it is not good for Greece, which requires clear solutions to transcend the many obstacles that lie ahead, and to have a basis to truly hope.