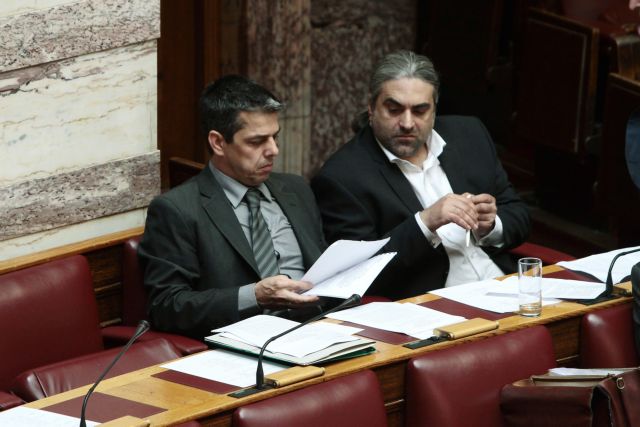 The detained former Golden Dawn MP Stathis Boukouras was taken from the prison facilities in Nafplio to submit his deposition before the investigating judges handling the criminal organization case against the neo-Nazi party.

Boukouras refused to answer any questions, arguing that he has already responded in writing, while professing his innocence. The former member of the neo-Nazi party, who burst out in tears during his last appearance in Parliament, told the investigative judges that he was not a Nazi or a fascist and claimed to have attempted suicide twice while detained.

Depositions are also expected by Dimitris Koukoutsis on the 6th of June, Nikos Kouzilos on the 10th of June, Eleni Zaroulia and Michalis Arvanitis on the 12th and 13th of June, while Chrysovalantis Alexopoulos will submit his deposition on the 16th of June. When Alexopoulos resigned from the party, he made explicit references to criminal actions attributed to Golden Dawn members.

Meanwhile the discussion for the lift of the parliamentary immunity of Nikos Michaloliakos, Christos Papas and Yannis Lagos – all of whom are facing criminal organization and firearm possession charges – will take place in parliament on Wednesday. It seems likely that the three detained MPs will be present in parliament for the discussion.

Golden Dawn spokesman Ilias Kasidiaris has not yet been summoned by the courts, after his immunity was lifted in relation to illegal firearm possession charges. Kasidiaris may however face further charges after a group of lawyers submitted a case file indicating that the MP played a central role in the pogrom against migrants that took place in down town Athens in May 2011, after Manolis Kantaris was killed by a group of migrants during a mugging.