Kammenos: “There are far-right elements in New Democracy’”

The leader of the Independent Greeks party (ANEL) Panos Kammenos appeared on Ant1’s morning news program, where he predicted that PASOK… 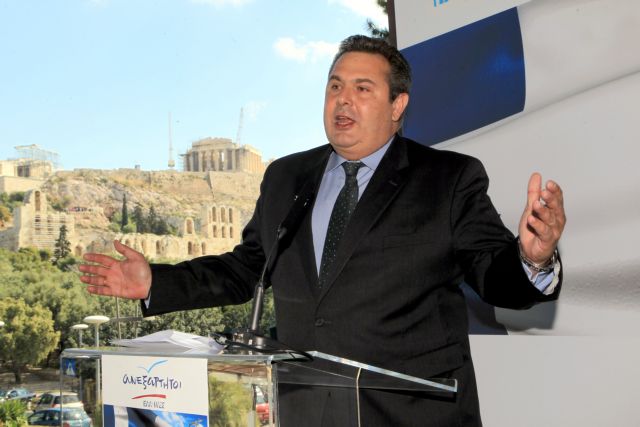 The leader of the Independent Greeks party (ANEL) Panos Kammenos appeared on Ant1’s morning news program, where he predicted that PASOK will never make it in Parliament again and argued that there a far-right elements in New Democracy.

Mr. Kammenos was highly critical of PM Samaras’ associates, arguing that Makis Voridis “the former leader of [ultranationalist and pro-junta group] EPEN” and Adonis Georgiadis “who advertised books that denied the Holocaust” were indicative of the situation in the governing party.

When asked about the possibility of forming alliances, Mr. Kammenos stressed that there was “no chance” of cooperating with any of the coalition government parties, nor “the neo-Nazis in Golden Dawn”. An alliance with SYRIZA, argued the ANEL leader, would depend on whether they could agree on national matters.

The ANEL leader defended his party’s votes in the recent immunity lift of Golden Dawn MPs and explained that his MPs voted in accordance with the evidence presented. He also referred to the recent Supreme Court decision to allow Golden Dawn’s participation in the elections, arguing that justice cannot characterize the party a criminal organization on the one hand and approve its participation in the elections on the other. The ANEL leader claimed that “Democracy must be much more democratic against fascism”.

Additionally, Mr. Kammenos asserted that the economy is stuck in a rut and needs a shock, arguing that measures must be taken to encourage the markets, otherwise “we are looking at confiscations of property”. The ANEL leader proposed setting an 8% tax cap, canceling the unfair debt and suspending amortization payments.