Popmpeo extols US-Greece cooperation during visit to Souda Bay base 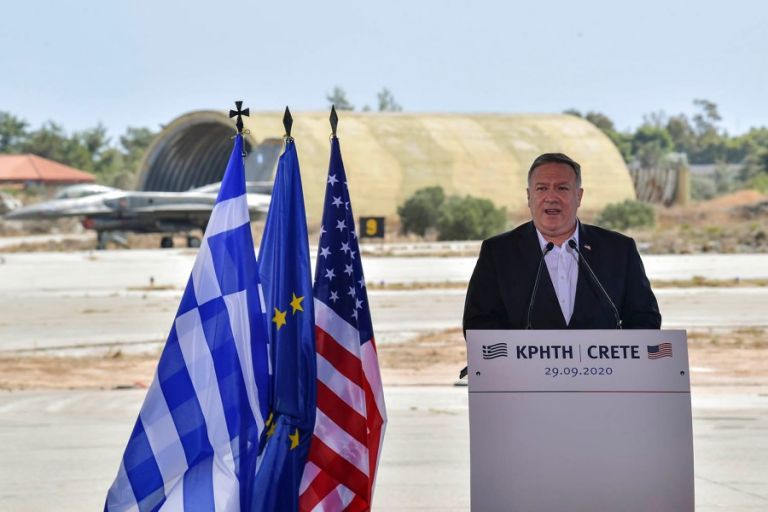 «Greece is a pillar of stability in the region,» US Secretary of State Mike Pompeo said during joint statements with Prime Minister Kyriakos Mitsotakis in Souda, while expressing his support for Greece and the Greek government.

Pompeo said it was the first time that a US Secretary of State has visited Greece twice in such a short space of time.

He underlined the importance of the military relationship between Greece and the United States.

He stressed that Greece is a pillar of stability and that the US side is very proud to support the leadership of the Greek government and the military leadership.

Pompeo also referred to his talks with Defence Minister Nikos Panagiotopoulos, saying that the two countries are working to make progress on the issues discussed a year ago regarding the defence cooperation agreement reached last year.

Pompeo stressed that it was a strategic choice to permanently dock the USS Hershel «Woody» Williams helicopter ship at the Souda Bay base because of its hugely strategic position He said it symbolises the bilateral strategic cooperation that exists and will continue to grow.

Regarding Greek-Turkish affairs Pmpeo  said that the US supports talks between NATO members, «as between Turkey and Greece», adding that he has spoken with NATO Secretary General Jens Stoltenberg about the progress being made in NATO.

He expressed hopes that these talks can continue in a serious way.

Pompeo closed his remarks by referring to the 200th anniversary since the Greek revolution that led to the foundation of the modern Greek state and thanked the prime minister once again for his hospitality.