Tasos Isaak, Solomos Solomou: I do not forget 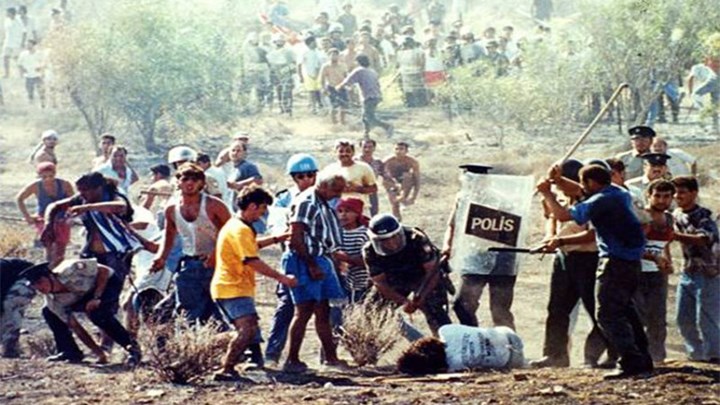 One must never forget that the division of Cyprus beyond all the diplomatic games and complex explanations it is a human issue, concerning human beings who continue to see their country divided.

Cyprus once again divided was commemorating the coup and the Turkish invasion –violence, occupation and partition.

At the time, associations of Greek-Cypriots motorcyclists took an initiative to make a big anti-occupation march-drive.

They wanted to peacefully dispute the Turkish occupation and had invited motorcyclists from other countries.

Everyone tried to hinder them and accused them of ignoring the repercussions. The others argued that a Cyprus solution would come through negotiations and the international community.

These are the negotiations that over 40 years have not solved the problem, and the international community has remained largely indifferent.

They entered the “dead zone” of the “green line”.

On the other side the forces of the occupation regime and settlers were awaiting them.

Some were trapped in the wire barriers and they were ruthlessly beaten.

Tasos Isaak (photo) was not entrapped but yet he ran to help a comrade.

He was beaten to death.

That was because he wanted to see his country united once again.

That was because he could not stand wire barriers dividing his country.

That was because he yearned to see a Cyprus in which all citizens can move freely throughout the entire island.

From the photograph one saw the slogan on his shirt “Motorcyclists dare – Liberation the ONLY solution”.

After his funeral and amidst emotional and enraged reactions Solomos Solomou climbed a pole at a Turkish guardpost and attempted to remove the Turkish flag.

He was shot dead by a bullet from an adjacent Turkish guardpost. Much has been written about the Cyprus problem. It is a complex issue with weighty responsibilities on all sides.

Yet, one must never forget that beyond all the diplomatic games and complex explanations it is a human issue.
An issue concerning human beings who continue to see their country divided.

I do not know if the Cyprus problem will be solved and in what manner.

Yet I know that such issues are judged not only at the table of diplomatic negotiations but also by the daring of those who put justice above all.

That is what Tasos Isaak and Solomos Solomou did.

That is precisely what Cypriot poet and freedom-fighter Doros Loizou, who was killed by the Greek junta-backed fascists of EOKA B on 30 August, 1974, said in his amazing poem:

“The Song of the Free Man”