Editorial: Toleration or complicity in violence

Last night’s foray of the ideological kin of the top gun of the now defunct N17, Dimitris Koufodinas, who is serving 11 life sentences for as many murders, clearly depicts the complete inability of Greek Police and the public order minister to ensure security. 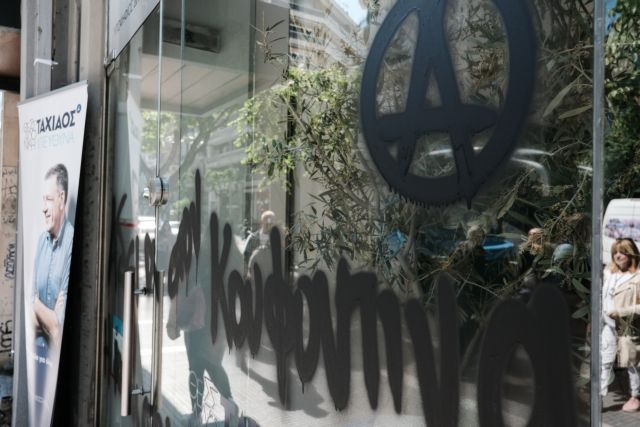 In which European country that operates under the rule of law can a bunch of hooded individuals turn things topsy-turvy in the city centre, which  is supposed to be the best policed  part of the capital, and that be considered something to be expected or natural?

Last night’s foray of the ideological kin of the top gun of the now defunct N17, Dimitris Koufodinas, who is serving 11 life sentences for as many murders, clearly depicts the complete inability of Greek Police and the competent public order minister to ensure the security of individuals and businesses even a stone’s throw away from the Parliament building.

The way such incidents are dealt with has exceeded any acceptable limit of toleration. Almost every day the Exarheia and Harilaou Trikoupi (Pasok headquarters) neighbourhoods are turned into a battleground.

Attacks on party offices and banks in the name of Koufodinas have been mushrooming over recent weeks. There has been no reaction on the part of the state to direct threats against judges who will review his furlough request because no one cares.

SYRIZA exploited various movements to rise to power and now appears incapable or indifferent. Ideological fixations of the left have contributed to these hooligans being considered “strugglers” who should not be targeted or called to account and pay for their lawlessness as others must do under the rule of law.

These troublemakers provoke without compunction in the centre of the capital and police look on as bystanders, even though gatherings have been banned in the city centre to keep football hooligans from creating mayhem.

These incidents of violence and lawlessness can no longer be tolerated.

The citizen’s protection minister and police top brass are indifferent to the anxiety and desperation of residents and businesses.

The prime minister and his ministers are constantly underscoring, and rightly so, the dangers posed by the lawlessness of the far right, and they cannot understand that this toleration of violence and insecurity is what breeds that monster.

Whether the government likes it or not, security in our day and age is a fundamental good.

Respect for the rule of law is a basic precondition for a well-governed society and a basic duty of the state if it does not want to become a tool of the extreme right.