Already, within the government one sees other clashes, related to the priorities of economic and social policy, as well as to the particular electoral strategies of government cadres. 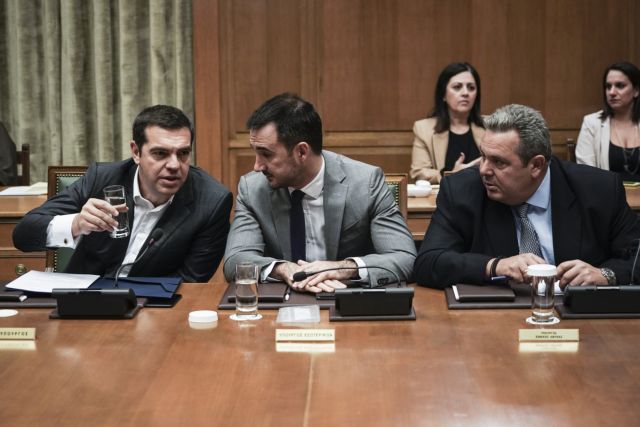 Quite some time ago, it had been projected that the by all accounts peculiar and mismatched coalition between PM Alexis Tsipras and Defence Minister Panos Kammenos would with time drown in the antitheses and diverging views that characterise it.

The deep differences in political culture, perceptions, and ideological grounding dispelled any doubts about the eventual outcome.

The proclaimed “anti-memorandum” front to which they both pledged allegiance did not suffice. It quickly proved artificial, and collapsed in the first six months of governance.

Despite all that, the two partners persisted, provoking everyone and everything, publicly emitting acrimony, intensity, and spite constantly.

There was no effort at communication, consensus, and understanding of the weight of economic, social and political conditions. One saw only easy allegations and vitriolic slander, even against supposed and fabricated enemies, with a view to justifying the inapt relationship between the political odd couple.

The time came, however, for that initial evaluation and prediction to be revealed in plain sight.

The episodic cabinet meeting highlighted not only the divergent strategies, but also the concealed discord and clashes that are unbefitting a coalition that determines the fate of the country.

The mutual recriminations between the ministers of foreign affairs and defence regarding the mismanagement of secret funds, and the defensive stance of an almost paralysed prime minister, underscored the weakness and wear of the current government.
The resignation of the foreign minister who was the defender of the Prespa Agreement (which the prime minister views as fundamental), for the sake of the imprudent and mismatched political partnership, revealed obvious impasses and dependencies, further aggravating the contradictions within the government.

Now, everyone wonders how much time Mr. Tsipras has left.

There is a common conviction that new episodes will follow Kotzias’ resignation, of comparable intensity and weight, which will render governance even more problematical.

Already, within the government one sees other clashes, related to the priorities of economic and social policy, as well as to the particular electoral strategies of government cadres.

It is no coincidence that those in the know say that the useful time of the government ends in December, and it is racing to ensure as much as possible the 2019 budget, and determine the ongoing disbursal of the year’s primary surplus.

It would be well if until then certain clear signals are sent to the markets, so as to promote one or two emblematic investments, in order to ameliorate the current negative impressions.

In an event, the government has neither a long course nor much time at its disposal. Either way, most people do not expect much from this government.

With mathematical certainty, the more time passes the government will slide from crisis to crisis, worsening the position of the country and its people.

Elections are now the only path. The sooner they are held, the better for the country.