Had the Tsipras government decided to recognise the existence of a “Macedonian” identity from the first round of talks, or not? The minutes from FYROM revealed that Kotzias had consented to this. 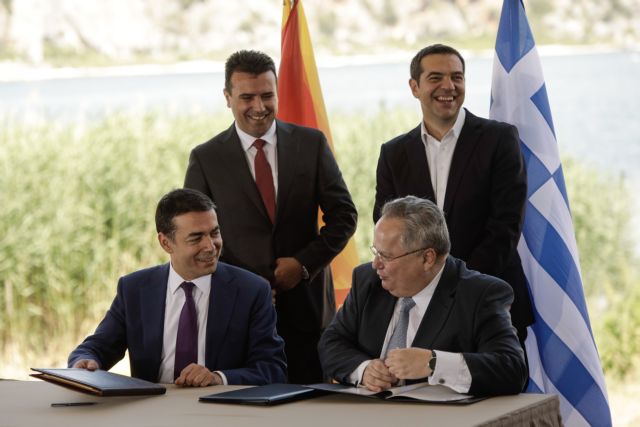 While the government has not answered basic questions about secret understandings reached by Foreign Minister Nikos Kotzias and PM Alexis Tsipras [with the FYROM side], behind the back of opposition parties and the Greek people, it is now trying to capitalise on a non-existent issue.

The minutes of meetings in FYROM reveal that Tsipras and Kotzias had agreed for FYROM to be renamed “Republic of Ilinden Macedonia”, and yet the government has gone on the offensive on issues of minor significance.

Maria Spyraki denied that secret meetings took place, but said that she met with FYROM’s prime minister by chance in Brussels. She said there was no second meeting, as FAZ had reported.

“I was not acting as an envoy of Mitsotakis. I had instructions to present our positions to all involved parties. I am acquainted with Zaev and we have common acquaintances. I have met many times with [FYROM Foreign Minister Nikiola] Dimitrov. He asked me what we will do, and I said that we will vote down the compromise being pushed by Tsipras, and that we had no formal briefing until then,” Spyraki said.

Certainly, the PM’s office would not leave such an issue without comment, isolating the “meetings”, but not offering answers on major issues that arose from the revelation of the minutes of meetings between party leaders in Skopje.

The prime minister’s press office, which is to say Thanasis Karteros, “smelt blood” and stated in its announcement:

“Even as she was accusing the government of secret diplomacy, the party spokesperson was secretly meeting the leader of our neighbouring country, before the beginning of the Greek government’s contacts [with FYROM] on the naming issue,” the statement read.

‘While domestically she donned the mantle of the Macedonia liberation fighter, she was the spokesperson of the party, who was explaining to Zaev that New Democracy’s opposition was pretextual, and related to Mr. Mitsotakis’ commitments to his party’s extreme rightists.”

The government has not answered a series of crucial questions.

Had the Tsipras government decided to recognise the existence of a “Macedonian” identity from the first round of talks, or not? The minutes from FYROM revealed that Kotzias had consented to this.

Is it true that at a meeting in Sounio the name Republic of Ilinden Macedonia, translated in all languages, was tabled, and that Kotzias agreed?

According to FYROM’s foreign minister, Nikola Dimitrov, his Greek counterpart said that that would do, “as it draws an adequate distinction between their and our Macedonia”. Did Kotzias agree to a name such as Ilinden, which was the epitome of irredentism and bore an historical charge and weight that no one could shoulder?

If that is the case, then Kotzias is exposed at many levels, and someone must answer what exactly he was discussing in that period. The same minutes indicate that Alexis Tsipras himself agreed to this name.

One cannot have Dimitrov on the one hand claiming that both sides described the name Republic of Ilinden Macedonia as “a creative solution”, and on the other to have the Tsipras-Kammenos government remaining silent.

The government must also answer Dimitrov’s claim that in Sounio they had decided on the use of the abbreviations MK and MKD.

Is Dimitrov’s assertion that beyond recognition of a “Macedonian language”, in Sounio the Greek side had agreed to accept the notion of “Macedonian identity”?

How can the prime minister’s office make a major issue out of Spyrakis’ meetings, and speak of “secret diplomacy”, when Zaev himself (according to the minutes) said that the issue must close now, as when New Democracy comes to power that cannot happen?

Shouldn’t the government answer why, even though it is certain that Mitsotakis opposes them, they attack his “envoy”, as Ms Spyraki says?

Will the government answer why Zaev claimed that Athens will immediately send a letter to Nato for FYROM to join the Alliance?

“Tsipras promised me ‘I will speak to Macron, as it is not just for you not to have a date to start talks’,” Zaev said in response to a question from main opposition VMRO-DPMNE leader Hristijan Mickovski.

It is incredible but true. In May, when this conference of FYROM party leaders took place, it is clear that Athens had agreed to the Ilinden solution.

Mickovski asked Zaev if the question to be posed in the referendum would be, “Do you agree to a constitutional amendment to change the name of the Republic of Macedonia to Republic of Ilinden Macedonia?”

Zaev answered affirmatively, noting that he would like to hold the referendum before September.