Tsipras said that grappling with the irredentism issue comes before the name, and he stressed that there «must be no open window that would allow new [irredentist] provocations in the future». 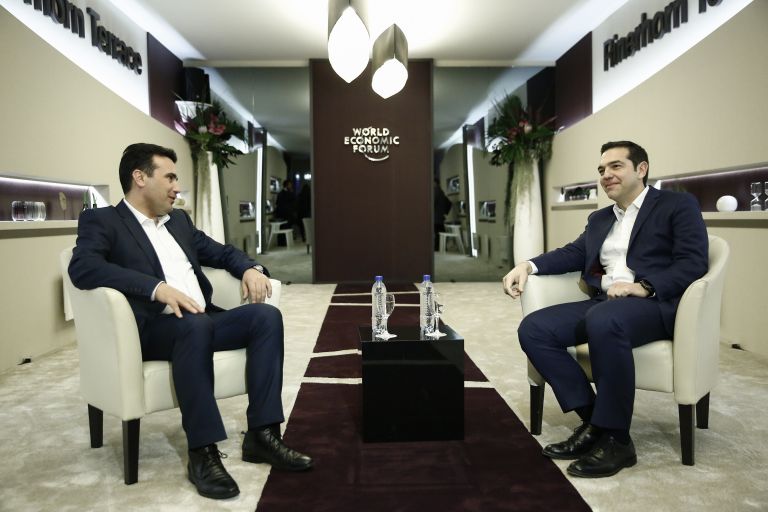 The Prime Minister of the Former Yugoslav Republic of Macedonia, Zoran Zaev, announced today that he will take immediate steps to change the name of the Skopje Alexander the Great Airport and of a national highway with the same name, leading out of the capital to the airport, as a first good will step toward resolving the Macedonian naming dispute and related thorny issues.

The announcement came at a joint press conference with Prime Minister Alexis Tsipras, after three-hour talks on the sidelines of the World economic Summit at Davos, Switzerland.

Tsipras, for his part, stressed that resolving and putting to rest Skopje’s irredentist claims against Greece is at the top of Athens’ agenda in the naming talks.

Tsipras said that grappling with the irredentism issue comes before the name, and he stressed that there «must be no open window that would allow new [irredentist] provocations in the future».

On the Greek side, Tsipras agreed to advance Skopje’s candidacy for membership in the Adriatic-Ionian initiative (AII).

Moreover, the Greek government will move to ratify in parliament the second stage of the FYROM-EU Association Agreement, Tsipras announced

Tsipras underlined the unswerving Greek position that a comprehensive settlement – that addresses not only the name, but also the eradication of irredentist claims in the FYROM constitution, and resolves issues of language and national identity – is the absolute precondition for Athens to approve Skopje’s entry to Nato and the EU. Greece is a member of both and unanimity is required in approving new members.

The two sides agreed to intensify talks at the level of prime ministers and foreign ministers, and Tsipras said that there will be efforts to open a border passage between the two countries, at Prespes.